“Imam Khomeini's movement was similar to the movement of the Prophet” 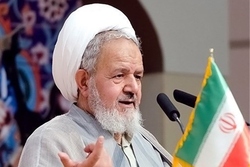 Hojjat al-Islam Sa'idi, “Imam Khomeini's movement was similar to the movement of the Prophet.”

RNA - Referring to the similarities of the Islamic Revolution to the Prophet Muhammad’s (PBUH) movement, Hojjat al-Eslam Ali Sa'idi, head of the Ideological−Political office of the Commander-in-Chief of the Iranian Armed Forces, Ayatollah Khamenei said, “The first major achievement of Iranian Islamic revolution is the changing of the nature of the system of government and Imam Khomeini’s masterpiece was changing the Imperial system which was a secular, and anti-religious system and transforming it into a religious one.”

“The transformation in the legislative system is another transformation that the Islamic revolution has been pursuing and this system should be based on Sharia law. We believe that the law of sharia covers all aspects of human life. The rule of law was at the time of the Shah based on individual views and many of the MPs at that time were Freemasonry spies. But Imam Khomeini determined the rules according to religion”, Hojjat al-Eslam Ali Sa'idi told the clergies of the Sisters’ Seminary in Isfahan.

Tags: Prophet Muhammad Imam Khomeini Islamic Revolution
Short Link rasanews.ir/201rL5
Share
0
Please type in your comments in English.
The comments that contain insults or libel to individuals, ethnicities, or contradictions with the laws of the country and religious teachings will not be disclosed