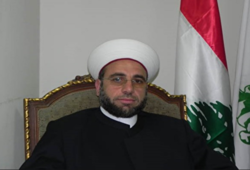 Rasa – Shaykh Maher Abdul-Razzaq said, “We believe that the Islamic Revolution of Iran is a ‎revolution with the blessing that was established in the path of the Prophet Muhammad.”

RNA – In an exclusive interview with Rasa News Agency, Shaykh Maher Abdul-Razzaq, the ‎head of Lebanon’s Reform and Unity Movement, said, “We believe that the Islamic ‎Revolution of Iran is a revolution with the blessing that was established in the path of the ‎Prophet Muhammad and many of the original Islamic goals were achieved during the current ‎period. This revolution took place on the correct basis and its fruits in the region are ‎tangible.”‎

The Lebanese Sunni cleric added, “The Islamic Revolution is like the tree that the Holy Quran ‎has referred to: ‘Have you not regarded how God has drawn a parable? A good word is like ‎a good tree: its roots are steady and its branches are in the sky’ [14:24]. On this basis, the ‎positive effects of this revolution are evident in its defence of the Islamic Resistance ‎movements and the dignity of the Islamic ummah. This revolution is the source of the ‎protection of the authority of Islam and is different from the approach of many Islamic ‎leaders to the formation of sovereignty.”‎

Shaykh Abdul-Razzaq continued, “They follow the Zionist and arrogant powers of the world ‎led by the United States and they give their wealth and dignity to them while the Islamic ‎Revolution is the source of the dignity and power of the Islamic ummah. If it didn’t take ‎place, the Islamic ummah would have lost its integrity and dignity and on this basis we would ‎say that the Islamic Revolution occurred due to divine destiny so that this ummah is united ‎and victorious in the present century.”‎

Tags: Islamic Revolution Abdul-Razzaq Lebanon Sunni Iran Khomeini Zionism
Short Link rasanews.ir/201rKs
Share
0
Please type in your comments in English.
The comments that contain insults or libel to individuals, ethnicities, or contradictions with the laws of the country and religious teachings will not be disclosed