Imam Khomeyni was the reviver of pure Muhammadan Islam ‎ 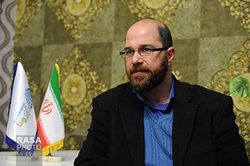 Rasa – The international cultural activist stated that Imam Khomeyni gave a new life to the ‎Islamic ummah and considered the revival of the Islamic jurisprudence system, the power of ‎the Ummah of Islam and religious rationality as among the blessings of the 1979 Islamic ‎Revolution.‎

The convert to Islam added, “The phenomenon of the Islamic Revolution is not a normal ‎phenomenon. Today, more than 50,000 from all over the world are studying in Qom and ‎familiar with the effects of the Revolution. Today, those who previously had no knowledge ‎of Islam are interested in Islam and even some become Shi’ah clerics and promote religion ‎in foreign countries.”‎

Hujjat al-Islam Asaad referred to the situation of the Islamic world before and after the ‎Islamic Revolution and said, “At that time, the situation of Islam and Muslims in foreign ‎countries was very unsuitable and there was no access to proper information on Islamic ‎knowledge. Also, Muslims didn’t have any rights or status in foreign countries.”‎

He continued, “The late Imam [Khomeyni] gave the Islamic ummah a new life with the ‎Islamic Revolution. The purpose of the mission of the prophets was to revive the divine ‎traditions that lead to the life of the society. The late Imam was able to give life in various ‎dimensions to the people of Iran and the Islamic ummah.”‎

Tags: Soheil Asaad Iran Islamic Revolution Khomeini
Short Link rasanews.ir/201rKl
Share
0
Please type in your comments in English.
The comments that contain insults or libel to individuals, ethnicities, or contradictions with the laws of the country and religious teachings will not be disclosed