Despite the economic problems, the Iranian nation will creates an epic on 22 Bahman‎ 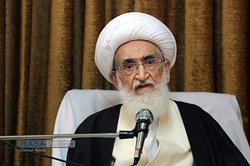 Rasa – The revered source of emulation said, “The dear people of Iran, just like in past ‎years, will stand with steady feet and fervent slogans, even though they are suffering from ‎economic problems, and will come to the fore.”‎

RNA – In a statement, Grand Ayatollah Hoseyn Nouri-Hamadani commemorated the ‎martyrdom anniversary of Lady Fatimah al-Zahra and invited the revolutionary nation of Iran ‎to passionately participate in the 22nd of Bahman [11 February] rallies marking the fortieth ‎anniversary of the victory of the Islamic Revolution.‎

Ayatollah Nouri-Hamadani stated said that the people boldly stood in front of the bullets and ‎chanted the slogans of independence, freedom and Islamic Republic, saying, “The people ‎gave their lives, blood and martyrs in order for the Islamic Revolution to remain firm ‎because they consider the Revolution to be an Islamic and religious revolution.”‎

He added, “This year, the dear people of Iran, just like in past years, will respond to the call ‎of Imam Khomeyni, the Supreme Leader of the Islamic Revolution [Ayatollah Khamenei] and ‎the martyrs with great insight and will stand with steady feet and fervent slogans, even ‎though they are suffering from economic problems, and will come to the fore.” ‎

Tags: Nouri Nouri-Hamadani 22 Bahman Iran Islamic Revolution
Short Link rasanews.ir/201rKT
Share
0
Please type in your comments in English.
The comments that contain insults or libel to individuals, ethnicities, or contradictions with the laws of the country and religious teachings will not be disclosed