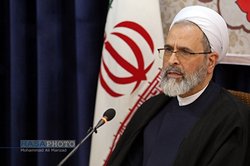 RNA – Speaking at the meeting on the purpose of organizing the Second International ‎Congress to Commemorate the 140 Martyred Clerics of the Defenders of the Holy Shrines in ‎Qom, Ayatollah Alireza Arafi referred to the blessings of the Islamic Revolution and stated, ‎‎“The Islamic Revolution has numerous blessings and its manifestations and blessings can be ‎presented in various dimensions.”‎

Ayatollah Arafi added, “The dangerous wave of Daesh came with open and hidden support ‎from the United States and Israel, which Iran escaped with the help of friendly states. Its ‎assistance to the Islamic Resistance movements in the region against terrorism were ‎completely principled. The attempts to resist against the Takfiri and extremist movements, ‎such as the actions of the Islamic Resistance against Israel, were derived from within. Iran’s ‎actions against Daesh were advisory and based on international law between Iran and ‎countries friendly to us.”‎

Tags: Arafi Islamic Rev Iran Resistance Daesh
Short Link rasanews.ir/201rK7
Share
0
Please type in your comments in English.
The comments that contain insults or libel to individuals, ethnicities, or contradictions with the laws of the country and religious teachings will not be disclosed