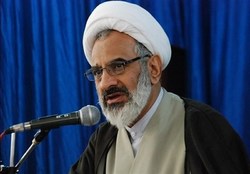 Rasa – Hujjat al-Islam Haj-Sadeqi that the Shi’ah clergy must be the pioneers in defence of ‎pure Islam and the religion of God. ‎

RNA – Speaking at a gathering of clerics and scholars of eastern Mazandaran province in ‎Sari, Hujjat al-Islam Abdollah Haj-Sadeqi, the representative of the Supreme Leader of the ‎Islamic Revolution in the Islamic Revolutionary Guard Corps, offered his condolences on the ‎martyrdom anniversary of Lady Fatimah al-Zahra, “The great work of Lady Fatimah al-Zahra ‎is on the orbit of wilayah (guardianship), adherence to the path of wilayah and sacrifice on ‎the path of wilayah.”‎

His Eminence that the Shi’ah clergy must be the pioneers in defence of pure Islam and the ‎religion of God and said, “Being a soldier of religion is a great honour which is the destiny of ‎the clergy and shields against errors and deviation.”‎
‎ ‎
Emphasizing that the truth of religion must be explained to the Islamic society, he stated, ‎‎“Today, doubts in the field of religion and deviant descriptions must be explained and ‎enlightened by the clergy for the people.”‎
‎ ‎
Hujjat al-Islam Haj-Sadeqi added that hijab and chastity and defending them is the defence of ‎Islam and the religion of God and said, “The issues that are raised in this regard and the fact ‎that some personalities assign them to the Quran and some of the narrations of the Prophet ‎Muhammad is a kind of deviation. The observance of hijab and chastity is emphasized by ‎the Quran and all of the divine prophets.”‎

He noted that unfortunately, some people distort Islam and religion in the country and ‎added, “These people are encouraging a dangerless and a benign Islam – in other words, ‎they are promoting form of Islam in society which is acceptable by the Americans.”‎