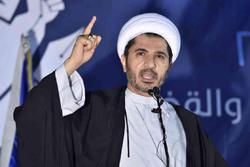 RNA - Salman, who headed the Shiite Al-Wefaq group, was convicted in November of "communicating with Qatari officials... to overthrow constitutional order", a ruling rights groups have called a travesty.

Salman's aides Ali al-Aswad and Hassan Sultan, who had been sentenced to life in absentia, also lost their right to appeal. Both men are former MPs and currently reside outside of Bahrain, AFP reported.

Qatar has repeatedly denied accusations of conspiring against Bahrain with Salman.

Bahrain and Qatar have been locked in a bitter regional dispute since June 2017, when a Saudi-led boycott of Doha was enforced over allegations it was cozying up to Iran.

Bahrain, Saudi Arabia and the United Arab Emirates banned their citizens from travel to Qatar.

Human rights groups have frequently said cases against activists in Bahrain -- men and women, fail to meet the basic standards of fair trials.

Tags: Al Khalifa Sheikh Ali Salman Bahrain
Short Link rasanews.ir/201rIG
Share
0
Please type in your comments in English.
The comments that contain insults or libel to individuals, ethnicities, or contradictions with the laws of the country and religious teachings will not be disclosed