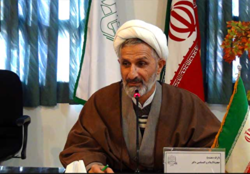 RNA – A conference entitled “Development of Religious Knowledge and the Logic of ‎Understanding Religion in the Light of the Islamic Revolution” by the Political Science ‎Department and in cooperation with the Logic for the Understanding of Religion Department ‎of the Research Centre for Culture and Thought on the occasion of the conference “The Role ‎of the Islamic Revolution in the Establishment and Development of the Humanities” on ‎January 26 in Qom.‎

Tags: Shakerin Islamic Revolution Iran
Short Link rasanews.ir/201rIA
Share
0
Please type in your comments in English.
The comments that contain insults or libel to individuals, ethnicities, or contradictions with the laws of the country and religious teachings will not be disclosed