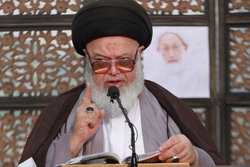 Referring to plans for strengthening Muslim women's position today, ayatollah Ghoraifi said, “Chastity and hijab should be an important part of these projects”.

RNA – “Currently the slogan "Strengthening the position of women", is one of the slogans that have been voiced by the ruling organizations, associations and intellectuals”, Ayatollah Seyyed Abdullah Ghoraifi one of the Bahraini prominent Islamic scholars said among the prayer goers at Imam al-Sadiq Mosque in Ghoful district of Bahrain.

“The motto ‘strengthening the position of women’, is a beautiful and attractive slogan, but it should not be followed through non-Islamic plans and ideologies”, Bahraini scholar pointed out.

Ayatollah Ghoraifi emphasized that such slogans should be based on religious teachings so that women play their role in the family and society, just as Islam has ordered

Tags: Ayatollah Ghuraifi Bahrain Islamic scholars Hijab
Short Link rasanews.ir/201rI1
Share
0
Please type in your comments in English.
The comments that contain insults or libel to individuals, ethnicities, or contradictions with the laws of the country and religious teachings will not be disclosed