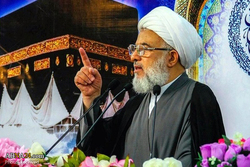 RNA – In his Friday prayer sermon delivered to a large and fervent crowd of believers in the ‎Iraqi holy city of Karbala’s Holy Shrine of Imam al-Husayn, Hujjat al-Islam Abdul-Mahdi al-‎Karbala’i criticized what he called “slander content against religious symbols” saying, “There ‎are different forms of disrespect and disrespect to religion is one form of it and it is divided ‎into three parts: the distortion of thoughts towards religion, disrespect for religious symbols ‎and insult to the principles of religion and its followers.”‎

The representative of Grand Ayatollah Sayyid Ali al-Sistani in Karbala added, “Every religious ‎though has symbols and principles and the actions of its followers are firm on them. ‎Therefore, disrespecting and slandering such thoughts towards religion is not acceptable. ‎Religious beliefs are scientific and belief-based truths and some people with different ‎interpretations and pretenses are causing damage to them.”‎

Hujjat al-Islam al-Karbala’i noted, “Occasionally, religious leaders and personalities in whom ‎people believe in are being disrespected and unpleasant things are attributed to them. The ‎scholars, the virtuous, the righteous and the believers are not immune from the attribution of ‎falsehood and slander. The main goal of these actions is to eliminate such people from the ‎hearts and minds of the people so that individuals with vicious intentions can lead the people ‎astray.”‎

He stated, “The internet is a very suitable place for building, nurturing and publishing fake ‎stories and unfortunately, naïve people easily believe these lies. Such issues become even ‎more dangerous when religious and denominational symbols become are separated from ‎society and they lose their power. The glory and majesty of religious symbols is in ‎strengthening intellectual and ideological beliefs and this is a very important issue. ‎Disrespecting and slandering these symbols is the most dangerous form of disrespect and ‎slander.”‎

Tags: Karbalai Iraq Najaf Friday Sistani
Short Link rasanews.ir/201rGX
Share
0
Please type in your comments in English.
The comments that contain insults or libel to individuals, ethnicities, or contradictions with the laws of the country and religious teachings will not be disclosed