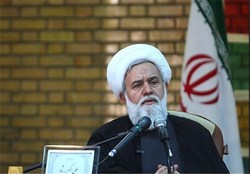 Rasa – The 9th meeting of the faculty members of the Institute of Islamic Culture and Thought was held ‎under the auspices of Ayatollah Sadeqi-Rashad to review and critique the 2030 Agenda for Sustainable ‎Development.‎

RNA – The ninth forum of the members of the board of trustees of the Research Centre for Islamic Culture ‎and Thought was held in Qom in the presence of Ayatollah Ali-Akbar Sadeqi-Rashad, a member of the ‎Supreme Council of the Cultural ‎Revolution.‎

At this forum, which was commissioned to review and critique of the 2030 Agenda for Sustainable ‎Development, Ayatollah Sadeqi-Rashad, the director and founder of the Research Centre for Islamic Culture ‎and Thought, considered the role of the country’s scientific elite as unmatched and influential in the ‎examination of national and transnational documents and said, “This document can be criticized from three ‎angles: from the transnational perspective and the perspective of essentialism toward the issue. from the ‎angle of the analysis of the content and the examination of the suspected documents and ultimately from the ‎angle of the exposure of the authorities to this issue. More than that, during this forum, there was an ‎overview of all three aspects of this document.” ‎

He added, “With regard to the first approach, I don’t think that our friends are the one who have doubts that ‎this document has been issued to improve the situation of people in the Third World and in weaker ‎countries. It’s not really the case that this document isn’t an article that contains scientific criticism, although ‎it’s good to examine this, although we must also examine the nature of such documents.”‎

Ayatollah Rashad argued that the 2030 Agenda for Sustainable Development is commonly referred to as a ‎prescription for the Third World and eastern countries and Western civilization is taking steps to develop it ‎and said, “The difference between the current West and the current East is not that they have technology ‎and others don’t, the difference is in regard to lifestyle and the way in which family relationships and social ‎issues are regulated and the West is seeking to impose its own civilization on our world.”‎

His Eminence added, “It is, of course, naïve to ask for some kind of protection. If we want to think correctly, ‎we will know how to deal with these issues in the international community.”‎
In this forum, the various members of the board of trustees as representatives of different groups from four ‎research institutes reviewed and criticized the 2030 Agenda for Sustainable Development. ‎

The 2030 Agenda for Sustainable Development is a set of seventeen global goals for 169 specific ‎areas developed by the United Nations during a deliberative process involving its 193 member states ‎on 25 September 2015. ‎

Critics of the 2030 Agenda in Iran, including many sources of emulation and the Supreme Leader of the ‎Islamic Revolution, Ayatollah Khamenei, say the implementation of the agenda is betrayal of Iran’s Islamic ‎codes, will violation its cultural independence and will demoralize its education system.‎