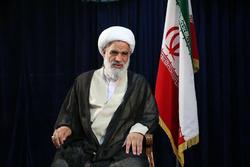 Rasa – The member of the Society of Seminary Teachers of Qom emphasized that the ‎revolutionary sources of emulation stand against deviations and noted the efforts of the ‎think tanks of the enemies to weaken and erase the presence of the marja’iyyah from the ‎scene.‎

RNA – Speaking at a meeting between students and scholars from the Imam al-Husayn and ‎al-Ghadir Islamic Seminaries in the southwestern Iranian city of Ahvaz and Grand Ayatollah ‎Naser Makarem-Shirazi in the holy city of Qom, Ayatollah Abbas Ka’bi, the representative of ‎the people of Khuzestan province in the Assembly of Experts, presented a report on the ‎activities of these two seminaries.‎

The custodian of the Imam al-Husayn Seminary noted that along with their lessons and ‎discussions, the seminarians have also participated in a course on combatting Wahhabism, ‎propagation, oration and giving sermons in the Arabic language. Their mission is to engage ‎in religious propagation. ‎

Ayatollah Ka’bi considered the sources of emulation as the border guards of the authenticity ‎of the religion of Islam and said, “The revolutionary sources of emulation stand against the ‎deviations and the theory of Islam without a clergy and those who want the clergy to only ‎play a ceremonial role.”‎

In other remarks, the member of the Society of Seminary Teachers of Qom commemorated ‎the anniversary of the events of the 9th of Dey [December 30, 2009], which marks the ‎anniversary of the uprising against the sedition which occurred after the June 12, 2009 ‎presidential election, and said, “The uprising of the people of Qom on the 9th of Dey was the ‎first spark after the 15th of Khordad Uprising [June 5 and 6, 1963], which led to the victory ‎of the Islamic Revolution.”‎
‎ ‎
He stressed that the 9th of Dey was the symbol of the link between the authentic clergy, the ‎sources of emulation and the people and said, “The think tanks and deception rooms of the ‎Americans and the Zionists, just as they are angry with the prominent role of Wilayat al-Faqih ‎‎[Guardianship of the Jurisprudent], they are trying to weaken and erase the role of the ‎current sources of emulation on the scene of the defence of the Islamic Revolution and its ‎values and, of course, they will not achieve their objectives.”‎

Ayatollah Ka’bi explained the functions of the clergy in various fields, saying, “The sources of ‎emulation have a dynamic, vibrant and lively presence in society. The seminarians and clerics ‎are also soldiers of the sources of emulation.”‎