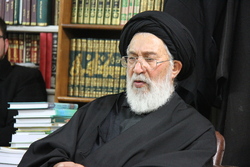 Rasa – The teacher in the Islamic Seminary of Mashhad stated that the salvation of society ‎can be accomplished by having piety and said, “It’s in our interest to be more and more ‎pious.” ‎

RNA – Speaking during his class on Islamic ethics at the Ayatollah Khoei Seminary in ‎Mashhad, Ayatollah Sayyed Jafar Sayyedan discussed the benefits of taqwa or piety and ‎God-wariness and the signs of the pious with respect to Nahj al-Balaghah [‘The Peak of ‎Eloquence’].‎

The teacher in the Islamic Seminary of Mashhad said that in Nahj al-Balaghah, Imam Ali ‎stated more than fifty signs of piety and added, “Piety is summarized in three things, a ‎serious decision to perform good deeds, abandoning sins and good morals.”‎

He added, “One who takes care to avoid those acts which aren’t correct and earnestly ‎makes attempts to move toward the state of good actions is considered as a pious person.”‎

Ayatollah Sayyedan referred to some of the lofty statements on piety in Nahj al-Balaghah ‎and said, “Whosoever engages in piety and that which pleases God, God establishes him on ‎the path of salvation which means that obtaining this salvation will not be easy but at the ‎same time as he is experiencing difficulty, his soul will be calm as he knows that he has ‎fulfilled his duty and he will ultimately obtain a good result and will be granted eternal bliss.”‎

The Iranian scholar stated that the salvation of society can be accomplished by having piety ‎and said, “It’s in our interest to be more and more pious.”‎

Referring to verse two of Surah al-Talaq [‘The Divorce’] on the benefits of piety, he stated, ‎‎“A person who in his speech and all aspects of life, commits to not sinning and to move ‎towards acting in accordance with the will of God will receive good in this world and in the ‎hereafter.”‎

Ayatollah Sayyedan added, “In verses four and seven of Surah al-Talaq, God also promises ‎to those who are pious that He will correct their work and forgive their sins.”‎
‎ ‎
His Eminence said, “God has guaranteed that anyone who is truly pious, He will turn their ‎afflictions into blessings and their discomforts into comforts and will give him a spirit such ‎that he will be in patient and thankful in the face of difficulties and also, God will grant him ‎sustenance in regard to that which he doesn’t even think about.”‎

He pointed out, “The expression of someone who has piety in the face of sedition, God will ‎make the space so clear that he easily recognizes path of righteousness and falsehood and ‎knows his own duty.”‎

Tags: Sayyedan Taqwa Piety Ethics Nahj al-Balaghah Quran
Short Link rasanews.ir/201rCx
Share
0
Please type in your comments in English.
The comments that contain insults or libel to individuals, ethnicities, or contradictions with the laws of the country and religious teachings will not be disclosed