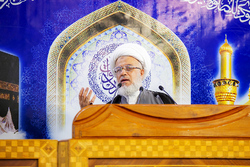 Rasa – Hujjat al-Islam al-Karbala’i said, “Unfortunately, we are witnessing the belittling of ‎various personalities on the internet. The people must be careful about the content that they ‎publish online.”‎

RNA – During his Friday prayer sermon delivered to a large and fervent crowd of believers in ‎the Iraqi holy city of Karbala’s Holy Shrine of Imam al-Husayn, Hujjat al-Islam Abdul-Mahdi ‎al-Karbala’i said, “Mankind has human dignity that God has preferred over all creatures in the ‎universe. Thus, this human dignity must be respected in society.”‎

The representative of Grand Ayatollah Sayyid Ali al-Sistani in Karbala added that the ‎degradation of social status is in contradiction to the necessity of maintaining human dignity, ‎which is emphasized by the religion of Islam. Therefore, human dignity must be protected, ‎despite religious and social differences.‎

Hujjat al-Islam al-Karbala’i stated that the reverence of the believer is higher than the ‎reverence of the Ka’bah and said, “Those who are seeking to destabilize the social status of ‎various people have been disturbed in religious, moral and cultural issues. Attempts to ‎destabilize the social status of different individuals will spark disputes and internal conflicts in ‎society.”‎

His Eminence emphasized that the destabilization of the social status of individuals in any ‎society that is composed of different religions, sects and cultures is very dangerous.‎

He stated, “Due to the expansion of communicative facilities, the process of belittling various ‎personalities has been accelerated such that it has become very abnormal. Such actions ‎have a lot of negative effects in society. Therefore, the religious, social, and moral aspects ‎of society must be repaired. The destabilization and destruction of the dignity and position ‎of human beings in any way is forbidden in Islam.”‎
‎ ‎
Hujjat al-Islam al-Karbala’i said, “Unfortunately, we are witnessing the belittling of various ‎personalities on the internet and the perpetrators of such actions must be held accountable ‎to God Almighty on the Day of Judgement. The people must be careful about the content ‎that they publish online.”‎

Tags: Karbalai Iraq Friday Friday Prayers Sistani Karbala
Short Link rasanews.ir/201rCi
Share
0
Please type in your comments in English.
The comments that contain insults or libel to individuals, ethnicities, or contradictions with the laws of the country and religious teachings will not be disclosed