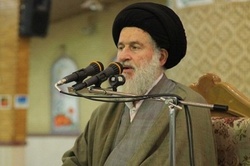 Rasa – The representative of Mazandaran in the Assembly of Experts said that the enemies ‎feel afraid of observing the Iran military might and said, “The Great Prophet 12 drills by the ‎IRGC contain the message of the authority of the Iranian nation to the enemies.”‎

RNA – In an exclusive interview with Rasa News Agency, Ayatollah Sayyed Rahim Tavakkol, ‎the representative of the people of Mazandaran province in the Assembly of Experts, stated ‎that the carrying out of the Great Prophet 12 drills by the powerful Islamic Revolutionary ‎Guards Corps (IRGC) demonstrated the military authority of Iran to the world and said, “The ‎enemies, using satellites and intelligence forces, are monitoring the strength of our armed ‎forces and are afraid of seeing the country’s military power.”‎

The Iranian politician emphasized the necessity of conducting powerful exercises by the ‎armed forces of the country and stated, “The more we raise and express the strength of the ‎armed forces of Iran in a greater and more magnificent manner, our enemies feel more ‎fearful.”‎

Ayatollah Tavakkol pointed out that the exercises carried out by the armed forces contain ‎the message of the power and authority of the Iranian nation to the enemies. ‎

His Eminence referred to the influence of the exercises of the armed forces on the ‎neutralization of the plots of the enemies, saying, “The enemies didn’t even think of ‎attacking the Islamic Republic of Iran after observing the power and authority of the armed ‎forces of the country.” ‎

Referring to the missile strike by the IRGC on Daesh terrorists in Syria on October 1, he ‎stressed, “When the enemies see the accuracy and power of the armed forces of Iran, they ‎find that if the Islamic Republic comes to the battlefield, all of the leaders of sedition will be ‎eliminated. Therefore, they are afraid of a military conflict with Iran.” ‎

Ayatollah Tavakkol continued, “When the enemies feel afraid of Iran’s military power, they ‎enter through the means of sedition and by hiring ignorant individuals, they try to create ‎conspiracies. Therefore, we must also be careful of these areas in order to defeat the ‎enemies.”‎

The IRGC held the main and final stage of massive exercises in the Persian Gulf, launching an ‎‎“offensive” component in Iran’s defensive strategy for the first time.‎