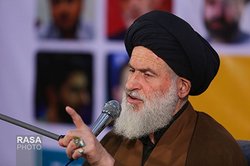 Rasa – The representative of Mazandaran in the Assembly of Experts said that the enemies ‎feel afraid of observing the Iran military might and said, “The Great Prophet 12 drills by the ‎IRGC contain the message of the authority of the Iranian nation to the enemies.”‎ 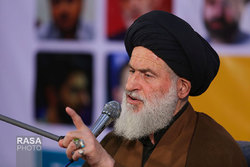 RNA – In an exclusive interview with Rasa News Agency, Ayatollah Sayyed Rahim Tavakkol, ‎the representative of the people of Mazandaran province in the Assembly of Experts, stated ‎that the carrying out of the Great Prophet 12 drills by the powerful Islamic Revolutionary ‎Guards Corps (IRGC) demonstrated the military authority of Iran to the world and said, “The ‎enemies, using satellites and intelligence forces, are monitoring the strength of our armed ‎forces and are afraid of seeing the country’s military power.”‎

The Iranian politician emphasized the necessity of conducting powerful exercises by the ‎armed forces of the country and stated, “The more we raise and express the strength of the ‎armed forces of Iran in a greater and more magnificent manner, our enemies feel more ‎fearful.”‎

Ayatollah Tavakkol pointed out that the exercises carried out by the armed forces contain ‎the message of the power and authority of the Iranian nation to the enemies. ‎

His Eminence referred to the influence of the exercises of the armed forces on the ‎neutralization of the plots of the enemies, saying, “The enemies didn’t even think of ‎attacking the Islamic Republic of Iran after observing the power and authority of the armed ‎forces of the country.” ‎

Referring to the missile strike by the IRGC on Daesh terrorists in Syria on October 1, he ‎stressed, “When the enemies see the accuracy and power of the armed forces of Iran, they ‎find that if the Islamic Republic comes to the battlefield, all of the leaders of sedition will be ‎eliminated. Therefore, they are afraid of a military conflict with Iran.” ‎

Ayatollah Tavakkol continued, “When the enemies feel afraid of Iran’s military power, they ‎enter through the means of sedition and by hiring ignorant individuals, they try to create ‎conspiracies. Therefore, we must also be careful of these areas in order to defeat the ‎enemies.”‎

The IRGC held the main and final stage of massive exercises in the Persian Gulf, launching an ‎‎“offensive” component in Iran’s defensive strategy for the first time.‎

Short Link rasanews.ir/201r8T
Share
1
Please type in your comments in English.
The comments that contain insults or libel to individuals, ethnicities, or contradictions with the laws of the country and religious teachings will not be disclosed