Rasa –His Eminence stated that the adding of Iran’s IRGC and General Qasem Soleymani to ‎their lists of people and organizations suspected of involvement in funding terrorism as a ‎‎“ridiculous” move. 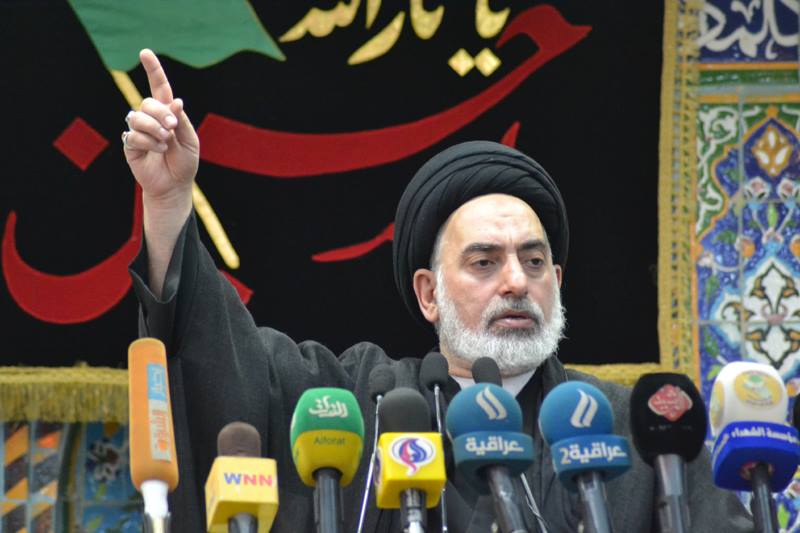 RNA – During his Friday prayer sermon delivered to a large and fervent crowd of believers in ‎the Iraqi holy city of Najaf’s al-Fatimiyah al-Kubra Husayniyah, Hujjat al-Islam Sayyid ‎Sadruddin al-Qubanchi congratulated the new Iraqi government on the selection of Adil ‎Abdul-Mahdi as the country’s prime minister and called for the election of other ministers ‎from among the pure and impartial people and from among those who aren’t covered by ‎the recently passed de-Ba’athification law [Accountability and Justice Law] which reinstates ‎thousands of former supporters of Saddam Husayn’s Ba’ath party to government jobs.‎

The Iraqi Shi’ah added, “The approval of the Council of Representatives of Iraq is conditional ‎on the implementation of the government platform.”‎

Referring to the ongoing famine in Yemen, Hujjat al-Islam al-Qubanchi strongly condemned ‎the silence of the international community in the face of this crime against humanity wherein ‎millions of Yemeni people are being starved to death due to the Saudi-led war on the ‎impoverished Arab country and said, “The international community had made a great uproar ‎about the murder of a single person [Jamal Khashoqji] in Istanbul and has turned a blind eye ‎to the deaths of millions and the massacres committed against the people of Yemen.”

His Eminence called the adding of Iran’s Islamic Revolutionary Guards Corps (IRGC) and ‎General Qasem Soleymani to their lists of people and organizations suspected of ‎involvement in funding terrorism as a “ridiculous” move and emphasized, “Bahrain is oppressing ‎its own people and Saudi Arabia is the world’s leading terrorist. We are waiting for a victory ‎soon, God-willing.”‎

In the section of his speech on religious issues, he highlighted the virtues of the Arba’in ‎pilgrimage and said, “Pilgrimage to the Holy Shrine of Imam al-Husayn has religious, cultural ‎and civilization dimensions and contains lofty meanings. In addition to love, forgiveness and ‎sacrifice, all concepts of humanity exist in it.”‎

Quoting a narration in this regard, Hujjat al-Islam al-Qubanchi said, “Imam Ja’far al-Sadiq has ‎stated that women are permitted to visit the Holy Shrine of Imam al-Husayn.” ‎