Rasa – The revered source of emulation said that today, the world needs the school of the ‎‎‘Master of the Martyrs’ and stressed “When people understood the purpose, they move with ‎their lives and hearts towards Karbala.”‎ 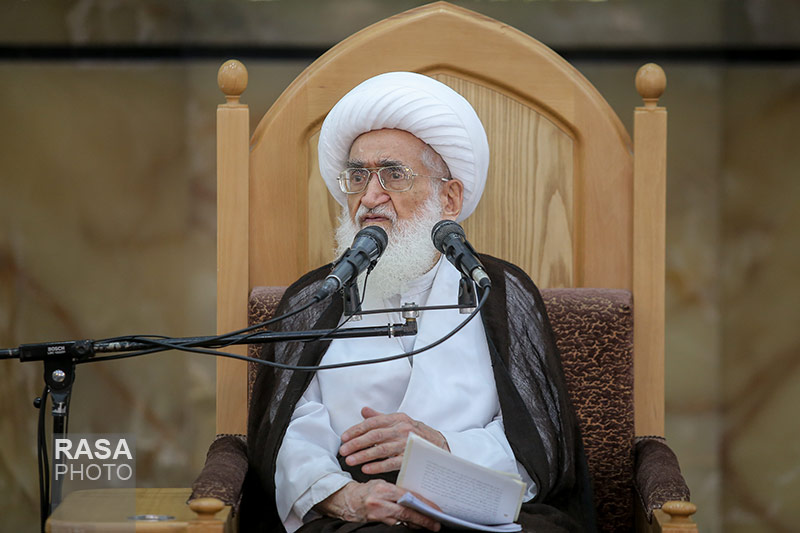 RNA – Speaking during his class at Qom’s Grand Mosque, Grand Ayatollah Hoseyn Nouri-‎Hamadani referred to the epic Arba’in pilgrimage to the Iraqi city of Karbala and said, ‎‎“Throughout history, the free people have paid attention to Imam al-Husayn.”‎

The revered source of emulation added, “The epic of Arba’in is a sign of the divine love of ‎the  lovers of Imam al-Husayn. Mankind must rooted in the events and take lessons and not ‎be indifferent to the cause. If we say that the Ahlul-Bayt were oppressed, we must explain ‎why such oppression has occurred. It must be said that the people at that time didn’t ‎perform their duties.”‎

Stating that the purpose of the uprising of Imam al-Husayn was to “enjoin the good and ‎forbid the wrong” in order to reform the path of the Islamic ummah, he stated, “Enjoining ‎the good and forbidding the wrong in relation to other good things is like sea water in ‎relation to saliva.” ‎

Ayatollah Nouri-Hamadani continued, “According to some narrations, those who witness an ‎oppressive ruler and sit silently, will be sent to hell along with that oppressive ruler. The ‎people must put the Husayni culture at the forefront of their work. The culture of ‘hayhat ‎minna al-dhillah’ [we will never be humiliated’] must be explained to the people in order that ‎they continue to resist against the enemies and not fall under the domination of the ‎enemies.”‎

The distinguished teacher in the Islamic Seminary of Qom stated that fortunately, the epic of ‎Arba’in has led to the awakening of Muslims and the freedom-seeking people who have glory ‎and magnificence and noted, “When people understood the purpose, they move with their ‎lives and hearts towards Karbala, exercise their authority and demonstrate the power of ‎Islam to the arrogant powers.” ‎

He said that today, the world needs the school of the ‘Master of the Martyrs’ and stressed, ‎‎“Today, the world must rise against oppression and the arrogant powers. Today, thirty ‎million pilgrims are gathering in Karbala and this movement is the background for the advent ‎of the Imam of the Time [Imam al-Mahdi]. With this vision, the important movement of ‎Arba’in must be strengthened as much as possible.”‎

In another part of his remarks, Ayatollah Nouri-Hamadani referred to the murder of Jamal ‎Khashoqji, a Saudi journalist, in Turkey, and criticized the controversial Western policies in ‎the field of human rights and stated, “The West has made such an uproar about the killing of ‎a single person but in regard to the massacres and crimes in Yemen, they have been ‎indifferent and silent.”‎