Rasa – A member of the Society of Seminary Teachers of Qom said, “The enemies have ‎done everything they could have done against Iran but they haven’t achieved their desired ‎result.” ‎ 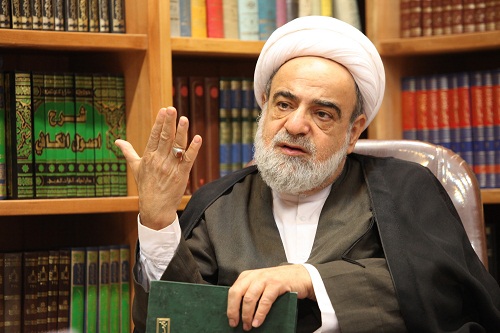 RNA – In an exclusive interview with Rasa News Agency, Ayatollah Najmoddin Tabasi, a ‎member of the Society of Seminary Teachers of Qom, said that the Armed Forces and the ‎Basij volunteer forces have always been present at the scene and kept the country away ‎from all dangers and added, “The armed forces are powerful and popular, especially the ‎Basij, and have always come to the scene in the various ups and downs and have protected ‎the independence and dignity of the Islamic Republic of Iran.”‎

The teacher in the Islamic Seminary of Qom criticized the irresponsibility some officials and ‎stated, “Despite the enemies’ efforts to frustrate the people of the Islamic Republic through ‎cyberspace, we once again see that the Iranian people have always acted vigilantly and had ‎a timely presence on the scene.”‎

He added that as much as they try, Western countries cannot make their people enter the ‎scene but in one day, the Islamic Republic of Iran can bring 700,000 sincere and Basiji ‎people from all over the country to the scene and demonstrate their power due to the ‎blessing of the Islamic Revolution.‎

Ayatollah Tabasi considered the existence of the Supreme Leader of the Islamic Revolution ‎‎[Ayatollah Khamenei] as one of the great blessings from God and stated, “The enlightened ‎and powerful statements of the Supreme Leader in his meeting of the Basijis indicates his ‎degree of confidence in the goals of the Islamic Revolution and the power of the younger ‎generation of society. He spoke completely from the standpoint of power and with his ‎enlightened statements, he explained all of the truths.”‎

He noted, "The Supreme Leader stands firmly against the great powers and the arrogant ‎powers, especially the United States, and he explains the facts in such a way that the ‎enemies are also stunned. He made strong statements such that the traitorous and weak ‎countries of the region understood their actions because the Supreme Leader, both in his ‎statements and in practice, proved that those who target the security of our country must ‎not expect security.”‎

His Eminence referred to the missile attack against the criminal leaders of the Ahvaz terrorist ‎attack by the Islamic Revolutionary Guards Corps (IRGC) and said, “There are many ‎messages for the arrogant powers in the fact that the powerful IRGC has killed Daesh ‎terrorists in the fastest possible time and in a place which was only several kilometres away ‎from the Americans. One of these messages is that the Americans now know that we can ‎target their mercenaries and we’re also able to target them.”‎

Stressing the need for the officials to acknowledge the Basij and the people, Ayatollah ‎Tabasi said, “On every path, the officials must be grateful for the existence of the Supreme ‎Leader and as much as they can, they must be a capital for the people and not neglect ‎them.”‎

He emphasized that the officials must not look to the West and the East to solve the ‎problems facing the country and added, “The officials must always act according to the ‎directions of the Supreme Leader and avoid adopting treacherous and ambiguous treaties. ‎The enemies have done everything they could have done but they haven’t achieved their ‎desired result.” ‎

Tags: Ayatollah Tabasi Najmoddin ‌Tabasi Leader of Iran Iran Iranian politics Iran's Supreme Leader Iranian Revolution Islamic Republic of Iran Iranian Government
Short Link rasanews.ir/201qlb
Share
0
Please type in your comments in English.
The comments that contain insults or libel to individuals, ethnicities, or contradictions with the laws of the country and religious teachings will not be disclosed