Rasa – Hujjat al-Islam al-Karbala’i stated, “The way of life and the movement of Imam al-‎Husayn taught us how to combat the deviations and dangers that threaten the Islamic ‎ummah.”‎ 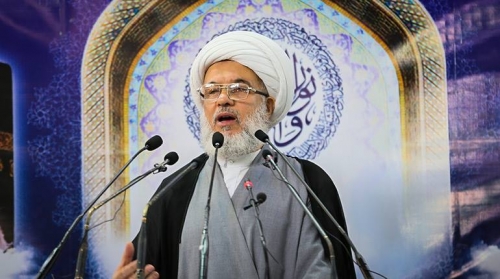 ‎RNA – During his Friday prayer sermon delivered to a large and fervent crowd of believers in ‎the Iraqi holy city of Karbala’s Holy Shrine of Imam al-Husayn, Hujjat al-Islam Abdul-Mahdi ‎al-Karbala’i said, “The movement of Imam al-Husayn has taught us that Islam is not just ‎worship and religious rituals.”‎

The representative of Grand Ayatollah Sayyid Ali al-Sistani in Karbala added, “If we discuss ‎and examine the way of life and the movement of the ‘Master of the Martyrs,’ we will ‎recognize that Husayni and authentic Islam emphasizes the struggle of the believer and the ‎Islamic ummah against deviation and misguidance and the importance of defending it against ‎the great dangers that exist in the present day.”‎

Hujjat al-Islam al-Karbala’i stated, “Many personalities in the history of Islam, who enjoyed a ‎special status in terms of age, knowledge and worship, remained in the corners of their ‎homes despite witnessing the threats against the Islamic ummah and didn’t play a role in ‎assisting Imam al-Husayn [in the battle of Karbala].”‎

The trustee of Holy Shrine of Imam al-Husayn continued, “Those who stood with complete ‎courage against the Daesh Takfiri terrorist phenomenon and fought against them with their ‎wealth and their lives, in fact, they have adhered to the movement of Imam al-Husayn. Such ‎individuals have preferred religious interests to personal, family and family interests.”‎

Hujjat al-Islam al-Karbala’i emphasized that mankind must examine the foundations of Imam ‎al-Husayn’s movement and see how they can be true Husaynis.‎

It must be noted that Arba’in marks forty days after the Day of Ashura, the day Imam al-‎Husayn ibn Ali, the Prophet Muhammad’s grandson, was martyred in the Battle of Karbala in ‎‎680 CE. ‎

On the day of Arba’in, the Shi’ah faithful traditionally walk for several days or longer to reach ‎the Iraqi holy city of Karbala where crowds chant and march around the Holy Shrine of ‎Imam al-Husayn. This year, Arba’in will be commemorated on October 30th. ‎