Through adherence to the values of Islam, the Revolution ‘the Iranian nation will be ‎victorious’‎

Rasa – Ayatollah Arafi said, “We must know that through resistance and adherence to the ‎values of Islam, the Islamic Revolution and the Iranian nation will be victorious.”‎ 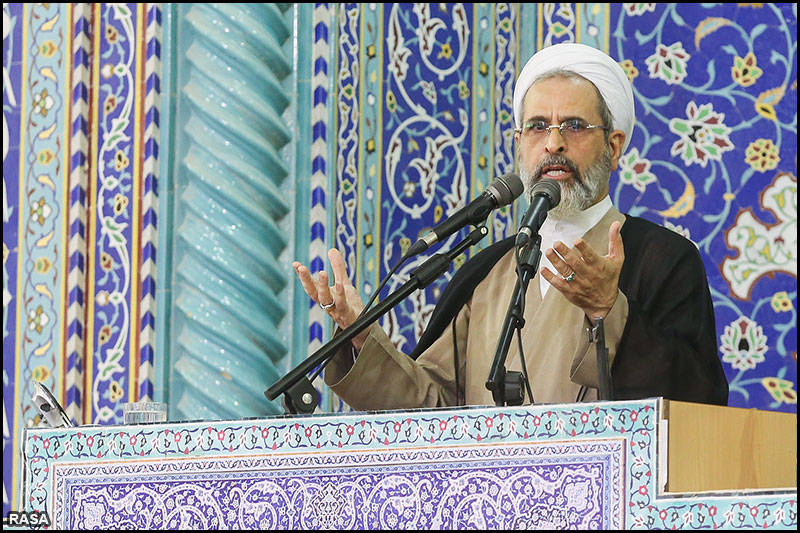 RNA – In his Friday prayer sermon to a large and fervent crowd of believers at Qom’s Qods ‎Prayer Hall, Ayatollah Alireza Arafi referred to the current state of Iran and the duties of the ‎people and authorities in this regard, said, “On the fortieth anniversary of the Islamic ‎Revolution, we are faced with heavy political, economic, social and cultural attacks.”‎

The member of the Society of Seminary Teachers of Qom added, “According to the correct ‎analysis by the Supreme Leader of the Islamic Revolution [Ayatollah Khamenei], these ‎attacks are passive and they must not remove us from the scene. These attacks are due to ‎the survival of the Islamic Revolution over the past forty years and the advance of the ‎crashing wave of the Revolution in the international arena. The enemies are prepared with all ‎their power. We aren’t facing a disappointing crisis but there is a challenge and the nation ‎and the authorities must come together to combat the problems.”‎

He emphasized on the importance of protecting revolutionary and Islamic authority, “The ‎basis of protection is faith, unity and cohesion and also includes missile power and defence ‎industries. Elements of authority must be preserved and strengthened with complete force. ‎Unity, the convergence and observance of the interests of the country in the light of the ‎guidance of the Supreme Leader must be on the agenda of the government and the nation.”‎

Ayatollah Arafi called for officials to pay greater attention of to internal capabilities and ‎capacities and continued, “We must rely on our internal strength and have no confidence in ‎the United States or even Europe. The eyes of the authorities must not be toward the ‎outside and we must protect our sense of independence, self-confidence and revolutionary ‎spirit in planning and orientation. We must know that through resistance and adherence to ‎the values of Islam, the Islamic Revolution and the Iranian nation will be victorious.”‎

The member of the Supreme Council of the Cultural Revolution noted, “In the face of the ‎current hardships – in the area of price control, the observance of the needy classes, the ‎fight against corruption, discrimination, displaced rights and rents everyone must work ‎together.”‎

Referring to the forthcoming epic of the Arba’in pilgrimage, he said, “This magnificent ‎movement must be performed with greater glorious. Arba’in is a great spiritual and religious ‎epic which is unparalleled in the world and people from all religions and denominations are ‎present and the program is guided by the people themselves.”‎

Ayatollah Arafi added, “The people of the world attend this great march, which is very ‎important, and everyone must strive to comply with the laws in this epic commemoration. ‎We are thankful for the decrease in the prices because we must open the path for more ‎people to attend from Iran and throughout the world. We must also thank the sources of ‎emulation and the Iraqi people and government.”‎

The dean of al-Mustafa International University said that the Iranian-Iraqi relations must be ‎strong and added, “The enemies have come to undermine these strong relations, while these ‎relations must be more firmly established than before. The new Iraqi officials must recognize ‎the strategic depth of relations and their worth for the independence of nations.”‎

He added, “God-willing, the Islamic ummah will enjoy the great epic of Arba’in in spiritual and ‎spiritual dimensions. In the pilgrimage of Arba’in, with all its virtues and great divine slogans, ‎we must certainly commemorate the memory of the martyrs of Iran and Iraq and the ‎Islamic Resistance. Thanks to these martyrs, the epic of Arba’in will be realized today.”‎

Referring to the bitter incident of the murder of Jamal Khashoqji, a Saudi journalist who ‎criticised the House of Saud in Turkey, Ayatollah Arafi said, “That a critic and journalist was ‎tortured and murdered isn’t acceptable.” ‎

His Eminence said, “Recently, [American President Donald] Trump humiliated the Saudi rulers. ‎We protest these rulers and we regard them as dependent and mercenaries but we really are ‎really annoyed that one individual from 10,000 kilometres beyond the borders of the Muslim ‎ummah dared to call this government a lactating cow and said that Saudi Arabia and its King ‎would not last two weeks in power without American military support. This is a shame for ‎the House of Saud.”‎

He noted “The House of Saud and the affiliated rulers must return to Islam and not affiliate ‎themselves to the West. Islam gives honour to individuals and governments and those who ‎have a Western orientation in their hearts must know the end of orientation to the West is ‎humiliation. Our hearts are burning for this abject and dependent government, which is being ‎humiliated in this manner.”‎

Addressing the regional rulers, Ayatollah Arafi said, “Look at the authority of Iran and the ‎Islamic Resistance Front, which all enemies are afraid of. The footprint of the Takfiris of ‎Saudi Arabia are visible in many events. There is a need to discover this and take ‎appropriate measures.”‎