Rasa – Ayatollah Nouri-Hamadani said that the Arba’in pilgrimage is a great manoeuvre of ‎the front of truth against falsehood and added, “The Iranian government must assist pilgrims ‎to travel [to Iraq] more easily.”‎ 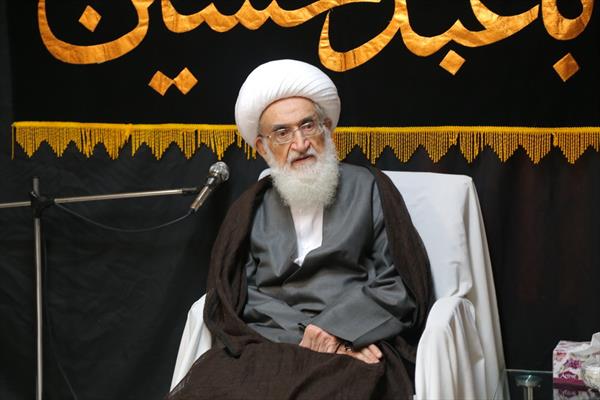 RNA – Speaking during a meeting the cultural officials from the Arba’in headquarters, Grand ‎Ayatollah Hoseyn Nouri-Hamadani referred to the waking of Lady Zaynab and Imam al-‎Sajjad after the tragedy of Ashura and emphasized on the need to introduce the goals of ‎Ahlul-Bayt to the world and said, “Arba’in is a great manoeuvre of the power of Islam and ‎those who aren’t Muslims also participate in this pilgrimage and we must make use of this ‎pure opportunity.”‎

The revered source of emulation considered the great program of Arba’in to be a great ‎manoeuvre against oppression, arrogance and Zionism and added, “The passionate ‎movement of the lovers of Imam al-Husayn and the thirty million-strong gathering of ‎pilgrims in Karbala is a manoeuvre of justice against the Zionist, Western and Arab arena of ‎falsehood.”‎

Arguing that the Arba’in program must be organized more systematically and with greater ‎unity and find greater magnificence and referred to the boycott by Western media ‎organizations and stated, “Western media does not reflect on Arba’in and its greatness.‎

The revered teacher in the Islamic Seminary of Qom stated that the manifestations of ‎Arba’in, such as flags, must be based on the slogans of Ashura and Karbala and the aim of ‎Ashura must be highlighted and said, “The durability and continuity of the Islamic Revolution ‎depends on the commemoration of Ashura.”‎

He said, “The caravans from Qom must also be different from other regions because they ‎are from the centre of the world of Shi’ism and the Islamic Seminary, which is the source of ‎this great revolution against tyranny and arrogance.”‎

Ayatollah Nouri-Hamadani said, “The enemies are worried and disturbed about the ‎manoeuvre of power and majesty of Arba’in and the unity of Iran and Iraq must be ‎protected in order to witness the implementation of the program of Arba’in in its best form.”‎

He added, “As much as it can, the Iranian government must assist pilgrims to travel [to Iraq] ‎more easily. The government allocates foreign currencies for foreign travels, while it must ‎devote to the Arba’in pilgrimage so that we witness more passion in this commemoration.”‎