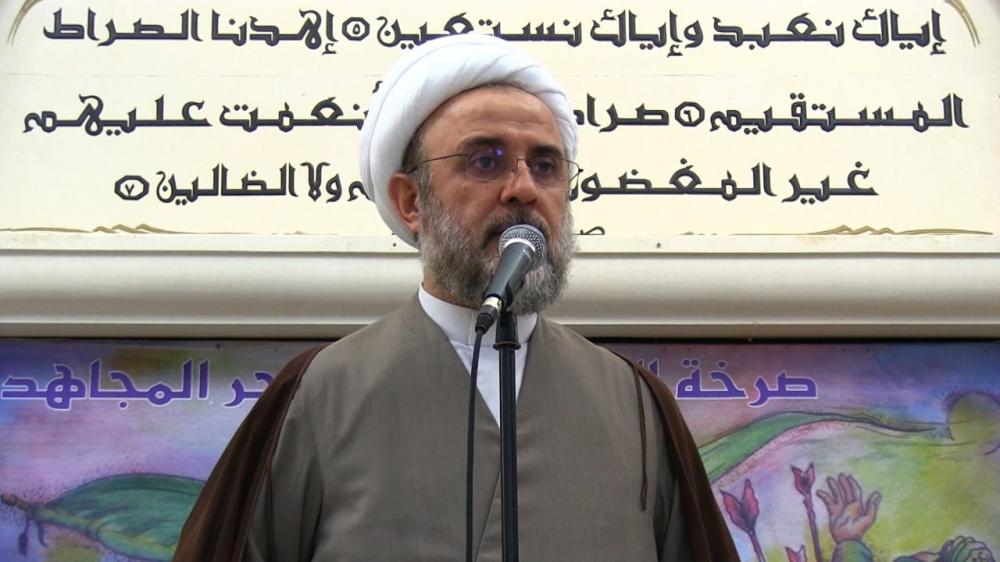 RNA – Speaking during a memorial ceremony held in the southern Lebanese town of Nabatiyeh al-Fawqa in the presence of cultural and educational figures and parties, Hujjat al-Islam Nabil Qawouq, the vice-president of the Executive Council of Hezbollah, announced that a group in Lebanon intends to make the issue of relations with Syria an excuse to justify the postponement of the formation of a cabinet in the country and said, “They want to create a controversial issue in order to cover up the failure of the formation of a government of national unity.”

The Lebanese cleric, “No matter how long, Lebanon will not become an arena for the settling of foreign accounts against the Islamic Resistance and will also not become a arena for the realization of Saudi or American achievements and what the Zionist regime is interested in.”

Hujjat al-Islam Qawouq added that the only path to the formation of a national unity government is to adopt the criterion of the results of the parliamentary elections and those who delays this only harms and weakens themselves and reveals the truth of their intentions to the Lebanese people.

In conclusion, Hujjat al-Islam Qawouq stated, “In the coming days you will succumb to the reality of the equations of victory of the Islamic Resistance Axis.”

Lebanon’s first parliamentary vote in nine years was held on May 6, with over 500 candidates vying for seats. Turnout was 49.2 percent, according to officials.

Tags: Hujjat al-Islam Qawouq Shaykh Nabil Qawouq lebanon crisis Nabil Qawouq Lebanon Hezbollah
Short Link rasanews.ir/201qFL
Share
0
Please type in your comments in English.
The comments that contain insults or libel to individuals, ethnicities, or contradictions with the laws of the country and religious teachings will not be disclosed