The Islamic awakening phenomenon is inspired by Iran’s Islamic Revolution

Rasa – The revered source of emulation argued that the people must maintain their presence on the scene of the revolution as always, said, “Today, the Islamic awakening awakening phenomenon is inspired by the Islamic Revolution.” 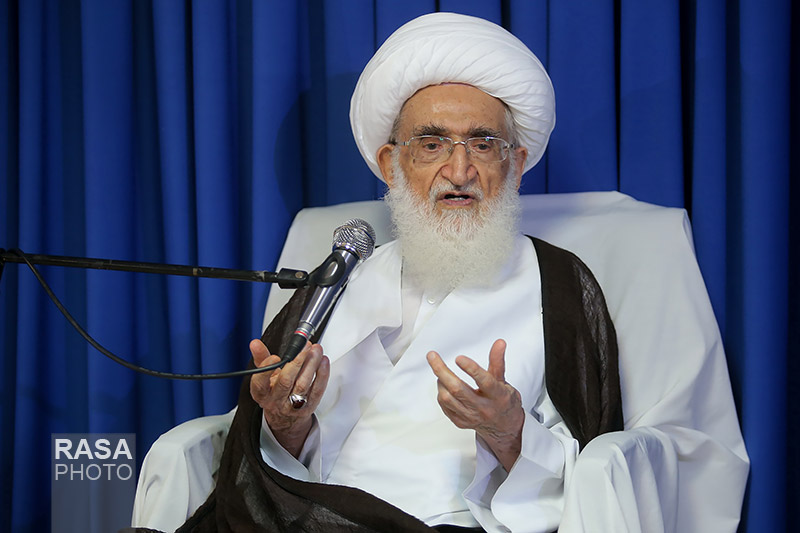 RNA – In a meeting with the commanders of the Law Enforcement Force of the Islamic Republic of Iran, Grand Ayatollah Hoseyn Nouri-Hamadani said that the life of mankind has various dimensions, including political, economic, and cultural dimensions, and that the most important issue of these is governance because the other dimensions are under the umbrella of that.

The revered source of emulation added, “God Almighty has had a particular interest in the issue of governance and leadership from the beginning of creation and God Himself determines the leader because such a individual must be a suitable and infallible person and not guilty of any error or sin and prophethood and imamate are determined by God.”

He explained that God knows best who to appoint as a prophet, imam and leader, said, “Human beings are dignified and God does not give their fate to anyone. For this reason, they must have infallibility in order to be protected from sin and error.”

Ayatollah Nouri-Hamadani continued, “The plan of the prophets is to invite the people towards the worship of God and to avoid the tyrants, hence mankind must recognize the tyrants and not fall under their domination. The domination of ethics, honesty, justice, integrity, and purity are influential among the people and also if a oppressive person comes to powers, his actions affect the people.”

The revered teacher in the Islamic Seminary of Qom expressed that the government must be from God and the opposition to such a government is to oppose God and added, “After the Prophet Muhammad, Imam Ali succeeded him but some individuals deviated from the path of Islam and he remained silent in order to protect Islam.”

He said, “Lady Fatimah al-Zahra bravely came forth and defended the station of wilayah (guardianship) and imamate and was martyred on the path of wilayah and for the divine government. The sermon of Lady Fatimah is very rich in terms of eloquence and content and Surah al-Kawthar was revealed in regards to her position and befittingly demonstrates her position to everyone.”

Ayatollah Nouri-Hamadani said, “The lack of knowledge of the grave of Lady Fatimah is indicative of the oppression against her and is the reason for the existence of a big question mark throughout history – why must the grave of the daughter of the Prophet of Islam be kept secret when she enjoys such a high status? If the Imams were silent, nobody would have done anything to them, but as they raised the flags of jihad and fought against oppression, the wrongdoers martyred them.”

He said that the atmosphere of Iran must be Islamic and that Islamic orders must be implemented and that which is against values must not exist in society, adding, “Before the Islamic Revolution, the enemies had marginalized religion and promoted the religious thought of politics. But Imam Khomeyni said that Islam has a plan in all dimensions.”

Ayatollah Nouri-Hamadani added that Imam Khomeyni worked on the people who were tyrannized and under the control of tyrannical rulers and kings from 1963 to 1978. Imam Khomeyni said people must be free because everything is for them and they must decide themselves.

“The result of the work of Imam became clear in the January 1979 and the people came to the fore and stood against the bullying and made the revolution bear fruit,” he explained.

He argued that the people must maintain their presence on the scene of the revolution as always, said, “Today, the Islamic awakening phenomenon is inspired by the Islamic Revolution.”

Ayatollah Nouri-Hamadani continued, “The arrogant powers have established their puppets in various countries, but people are becoming more and more alert day by day. In Yemen and Bahrain, we also see that people are awake and fighting.”