Hezbollah has become the daily bread of Trump’s speeches

Rasa – Hujjat al-Islam Na’im Qasim said, “Hezbollah has become the daily bread of the speeches of American President Donald Trump and his administration. He accuses the party of supporting terrorism and threatens it with sanctions and confrontation.” 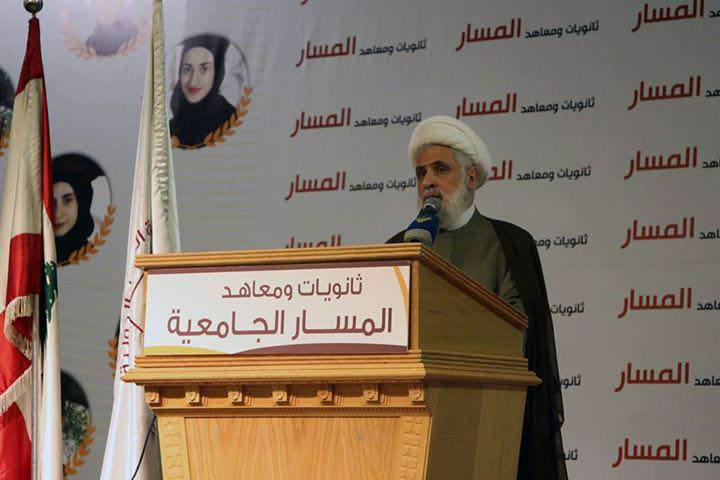 RNA – In a speech at a graduation ceremony at the al-Massar Institute in Haret Hrayk, Hujjat al-Islam Na’im Qasim, the vice-president of the Executive Council of Hezbollah, spoke in response to a recent atmosphere regarding the media’s attacks on Hezbollah and insisted the concern of these outlets was due to the failure of the American’s plans and those of their regional mercenaries.

The Lebanese Shi’ah cleric said, “Hezbollah has become the daily bread of the speeches of American President Donald Trump and his administration. He accuses the party of supporting terrorism and threatens it with sanctions and war.”

He stressed, “All this is because Hezbollah succeeded in liberating the land, it stopped the resettlement project in Lebanon, opened the horizons for the liberation of Palestine and because the party contributed to disrupt the project to destroy Syria by the United States.”

Hujjat al-Islam Qasim continued, saying, “The United States is attacking Hezbollah because it represents the pulse of people and their free decision, because it wants liberation and independence, because it resists against the Israeli and Takfiri terrorists and tyrants.”

He noted that Hezbollah played a significant role in the destruction of American-backed Takfiri terrorist groups and their regional mercenaries and said, “The equation of the [Lebanese] army, people and Islamic Resistance brought Lebanon to the forefront of the world and demonstrated to the enemies that they did not need anyone in the administration of their internal affairs.”

His Eminence said that Hezbollah succeeded in embodying the national image by defending Lebanese territory and some were betting that Hezbollah, an institution which holds an Islamic viewpoint and position, cannot produce a national situation.

“On the contrary, Hezbollah proved to be more patriotic than many of claimants who stole the country and gave it away to foreign interests and dissociated it from the interests of the nation and its citizens,” he said.

Hujjat al-Islam Qasim explained, “Hezbollah has managed to protect political stability and support security in Lebanon. Some individuals in our country are presenting their credentials to the United States and Israel by attacking Hezbollah. They believe that Trump will raise their position after the successive setbacks of the anti-resistance project.”

He added that they are upset because Hezbollah is the pillar of Lebanese stability, is committed to the constitution and is a partner in building institutions, is part of the government running the country and has full confidence in the ability and positions of President Michel Aoun.

The senior Hezbollah official said that Hezbollah is working, struggling and sacrificing but some only seek absurd rumours and accusations and stressed, “As long as actions are taken with the honesty and pride of the Islamic Resistance, nobody will ever stand on the flag with false and unsubstantiated words.”