Rasa - Hezbollah’s Deputy Secretary General, Sheikh Naim Qassem lashed out at those who justify collaboration with Israeli enemy, stressing that such attempts don’t acquit Israeli agents in Lebanon as it will remain Lebanon’s enemy. 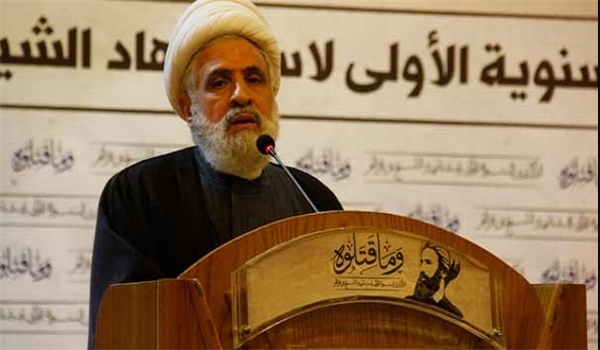 RNA - During a memorial ceremony on Sunday in Beirut’s Southern suburb (Dahiyeh), Sheikh Qassem stressed that the occupation regime was and will remain Lebanon’s enemy, adding: “All those who justify collaboration with this enemy can be described as Israeli collaborators themselves,” Al Manar reported.

“Those who are granting the Lebanese people certificates in patriotism they should take them from those who sacrificed themselves for the sake of the country and the nation,” Sheikh Qassem said, referring to various resistance factions in Lebanon.

Sheikh Qassem’s remarks come two days after Lebanon’s top court on Friday sentenced Habib Shartouni to death for the 1982 assassination of Bashir Gemayel, who was killed less than a month after he was elected president and soon after he agreed to start discussing diplomatic ties with the Israel.

Gemayel was well known for his ties with the Israeli occupation. Before his assassination, he held several meetings with many Israeli officials and generals, including former Prime Minister Ariel Sharon.

Friday’s ruling was slammed by many national parties across Lebanon who considered Shartouni a hero and Gemayel a traitor who attempted to sell his country. However, some parties, including Phalange party and Lebanese Forces, who were well known for committing massacres against Lebanese and Palestinians during the 15-year civil, welcomed the sentence.

Tags: Naim Qassem Hezbollah
Short Link rasanews.ir/201ojA
Share
0
Please type in your comments in English.
The comments that contain insults or libel to individuals, ethnicities, or contradictions with the laws of the country and religious teachings will not be disclosed