Trump’s resignation in favor of US, world

Rasa - Referring to the tyranny of the US president, Hezbollah’s deputy secretary general said President Trump’s resignation is in favor of the US and the world. 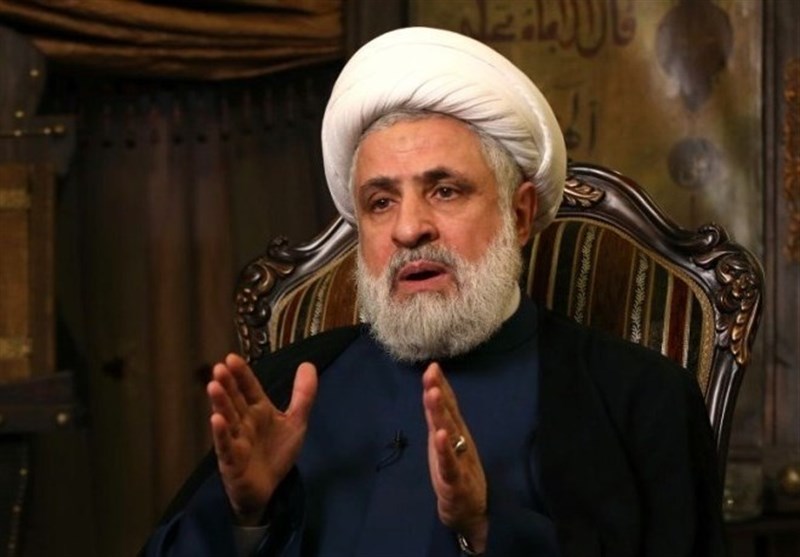 RNA - The deputy secretary general of Hezbollah in Lebanon, Sheikh Na'im Qasim, mentioned president Donald Trump’s recent speech saying: "Trump is trying to play with the feelings of the people of the world and is putting the world of the West and the East under pressure so that he can make himself the main decision maker."

“Donald Trump, who considers himself the head of the so-called largest and strongest government in the world, has shown that he does not adhere to any treaty and agreement and that he is suffering from the failure of the United States inside the Middle East region. He tries to impose US policies with power on the nations of the region, but he is not successful in this issue,” he added.

Sheikh Na'im Qasim, referring to the fact that today Trump is universally regarded as a ‘pious, tyrant, and oppressor’, stated: "The president of the United States presented false explanations for abolition of the nuclear deal to the world, saying that Iran does not adhere to this agreement. While the International Atomic Energy Agency (IAEA) and all the major countries of the world have admitted that Iran has indeed complied with this agreement.”

"Trump is trying to compensate for his failures. His view is a political point of view, and he does not tolerate a strong Iran that supports nations and borders and progresses in science and economics. He also cannot see the victories of Syria and the return of unity and stability to the country,” he noted.

The Lebanese cleric emphasized that Hezbollah's deterrence to the Zionist regime and the defeat of Takfiri terrorists’ compound and also the rise of resistance flag intolerable for the US president.

“Trump’s tiredness indicates that he is incapable of realizing his policies against the axis of resistance. He can threaten and lead the world to a tension, but he will not be able to force us to surrender, and the resistance front will be present in the global arena with popular supports even if Trump cannot stand it,” he reiterated.

He noted that the Zionist regime would remain our main enemy and that the occupied territories should be released from this regime and added that: “we will continue to fight the Takfiri terrorists until their full withdrawal from the region.”

America a danger to world security

Hezbollah's deputy secretary general added: "The United States has become a threat to world security and, with its views on the nuclear deal, has sparked the feelings of its allies, and today no country supports the actions of Trump. It's better for the United States and the whole world to throw Trump out of office, and it's not a great catastrophe for us, but for the United States, because we are resisting.

Sheikh Na'im Qasim emphasized that when the whole world was with the Zionist regime, we defeated the regime, while there were only a few countries in the world supporting us, we were able to bring the Zionist enemy to its knees in 2006.

"We also overcome the Takfiris who came from all over the world, and the US could not support them and achieve its goals," he said adding: “we will continue our victories because of the divine support and the will of our forces.

Sedition returns to its owners

Referring to the support of Bahrain, the UAE, Saudi Arabia and Israel, from the words of Trump against Iran, Hezbollah’s senior member said: "The combination of global suffocation and tyranny sometimes get together, but faces with global opposition as well. This shows that they are in a cultural, political, and moral degeneration.

He described Lebanon ‘a united country where the army, nation and resistance forces are hand in hand and the victories, which helps people better understand the real face of foreign conspiracies,’ and continued: "The success of Lebanon against Israel has gained the power of independence and resistance, and the victory over the Takfiris has made the resistance front an immortal front against religious seditions and instability.”

“The accusations against us have no outcome. Such seditions will return to their owners. Defending the Takfiris will lead to humiliation, and following enemies plans will not work either.

Sheikh Na'im Qasim pointed out the progress of Lebanon in the light of Michel Aoun's election as president and the approval of the electoral law on the basis of relativity adding: those who consider themselves to be representatives of the nation would be better off waiting for the ballot boxes and start bullying after the results come out.

Tags: Donald J. Trump US Trump Donald Trump
Short Link rasanews.ir/201ogQ
Share
0
Please type in your comments in English.
The comments that contain insults or libel to individuals, ethnicities, or contradictions with the laws of the country and religious teachings will not be disclosed