Authorities of Iraq’s Kurdistan Region must abandon their obstinacy

Rasa – Hujjat al-Islam al-Qubanchi warned against continuing disputes between Erbil and Baghdad and called on the authorities of Iraq’s Kurdistan Region to abandon their obstinacy and stubbornness. 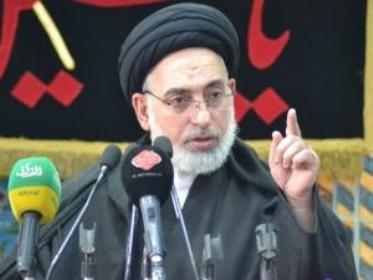 RNA – In his Friday prayer sermon delivered to a large and fervent crowd of believers in the Iraqi city of Najaf’s al-Fatimiyah al-Kubra Husayniyah, Hujjat al-Islam Sayyid Sadruddin al-Qubanchi praised the Popular Mobilization Forces and Iraqi military for the complete liberation of the town of al-Hawijah in the war-torn country’s northern Kirkuk Governorate and said, “More than 800 members of the Daesh Takfiri terrorist group have been handed over to the Peshmerga forces. The Kurdish military group must hand them over to the Iraqi authorities in order to bring justice to those captured by Daesh.”

On October 5th, Iraqi Prime Minister Haydar al-Abadi announced that al-Hawijah had been liberated from Daesh as part of an operation launched two weeks ago.

The Iraq Shi’ah cleric added that there is haven and no way for Daesh to have a continued presence on Iraqi territory and stressed, “We will soon see the complete liberation of the country.”

Hujjat al-Islam al-Qubanchi said, “The insistence of officials from the Kurdistan Region to separate from Iraq are facing the reaction of countries of the region and the world. Officials and politicians in the Kurdish Region are also facing intense disagreement from within over whether to accept or dismiss the referendum.”

He said that the leaders of the Kurdish Region should distance themselves from obstinacy and stubbornness before it’s too late and noted that the separation of the Iraqi Kurdistan Region would fragment the region.

In response to the sectarian statements of some officials who have said “our problem is with the Shi’ahs, not with the Kurds,” His Eminence stated, “The Shi’ahs have brought you freedom and have protected your women and your dignity.”

Hujjat al-Islam al-Qubanchi referred to the ceremony of Arba’in of Imam al-Husayn, which will be held in the shadow of munificence and forgiveness by many of the Iraqi people, as the “school of ethics” that the world must learn from and stated, “The Iraqi people are preparing to welcome the pilgrims on Arba’in of Imam al-Husayn and this dignity and grace is something which God has given the people of Iraq.

The Arba’in pilgrimage is the world’s largest public gathering and is held at the end of the forty-day mourning period following Ashura, which marks the martyrdom anniversary of the grandson of the Prophet Muhammad, Husayn ibn Ali in 680 CE. Arba’in will fall on November 10th this year.

The Friday prayer leader of Najaf urged the government and security officials to complete their preparations for the Arba’in ceremony as more than 22 million people will attend.

Hujjat al-Islam al-Qubanchi conveyed his condolences on the martyrdom anniversary of Imam Ali ibn al-Husayn al-Sajjad and said, “Imam al-Sajjad played a very important role in Imam al-Husayn’s movement and established a revolution in the court of the [tyrant caliph] Yazid.”