Ayatollah Qabalan asks US to “be fair to the oppressed nations, especially Yemen”

Rasa - The head of the Supreme Shi'ite Parliament of Lebanon stated that the United States must be fair to the oppressed nations, especially Yemen. 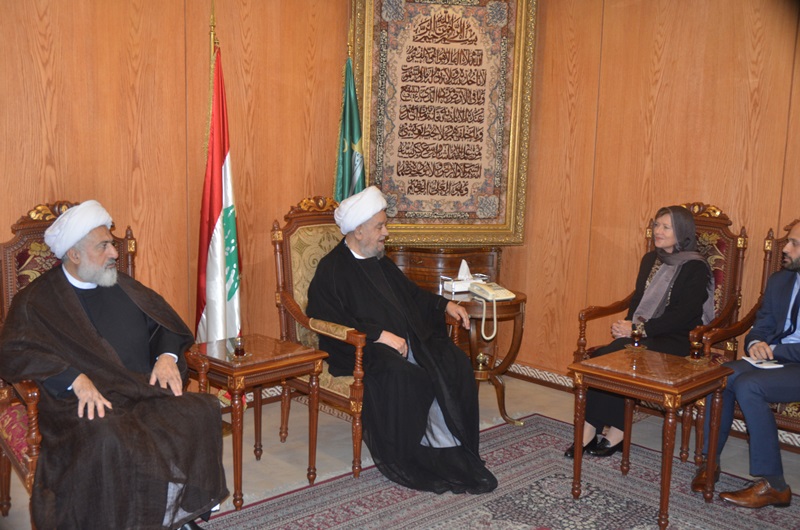 During the meeting, Ayatollah Qabalan said: "Shiite Muslims are a source of peace, kindness and cooperation, and they are moving towards a model of moderation and endurance. Shi’ites have never been offenders but they do not allow others to offend them either.”

This Lebanese scholar added that “Shiites stand against Takfiri and Zionist terrorism. Our hostility to the Zionist regime stems from occupation of the land of Palestine and displacement of thousands of Palestinians and also daily violation of Lebanon’s sovereignty.”

Earlier this month, Lebanese President Michel Aoun said during meetings with various delegations on the sidelines of the UNGA that Israel was still “lurking” on Lebanon’s border and the international community had failed to stop it.

“The Israeli enemy remains lurking. Israel keeps violating Lebanon’s sovereignty through daily breaches of its airspace and thus international resolutions. The international community has not been able to compel it to abide by the resolutions in force, not even by the international solutions that are put forward for the sake of peace in the region,” he said.

The resolution, which brokered a ceasefire in Israel’s 2006 war of aggression against Lebanon, calls on Tel Aviv to respect Beirut's sovereignty and territorial integrity.

Ayatollah Qabalan later stated: “Shiites have a friendly and cooperative relationship with the American people and they are never terrorists, but they’ve always been at the frontline of fighting terrorism. The Lebanese Shiites strongly support the unity and stability of the country and support the army and the government to defend their homeland.”

He appealed to the United States government for fairness in dealing with the oppressed nations, in particular Yemen and Palestine, and warned against supporting the Zionist regime’s crimes inside the Middle East as the main source of hostility against the Arab and Islamic nations, saying that the United States must seek to stop the humanitarian catastrophe in Yemen and move Palestinian refugees back to their homeland to establish an independent government in the al-Quds capital.

Tags: Yemen Qabalan
Short Link rasanews.ir/201oew
Share
0
Please type in your comments in English.
The comments that contain insults or libel to individuals, ethnicities, or contradictions with the laws of the country and religious teachings will not be disclosed