Kurdish separation due to completion of Daesh’s assigned duties

Rasa – The Friday prayer leader of Rey stressed that the plan for the autonomy of the Iraqi Kurdistan Region was followed by the support of some of the countries in the region due to the completion of Daesh’s assigned duties. 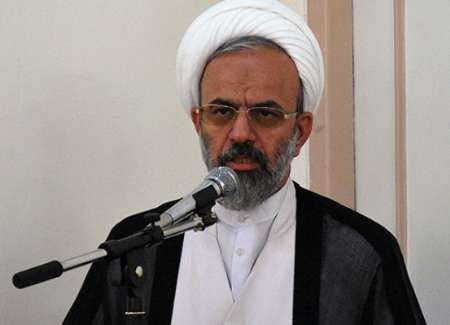 RNA – In an interview with Rasa News Agency, Hujjat al-Islam Abdol-Ali Ebrahimi, the deputy of the Provincial Council of Policy-Making of the Friday Prayer Leaders Across Iran, “Experience has proven that the imperialist powers don’t want the Islamic Republic of Iran to progress in its proper direction and be released from its problems.”

The temporary Friday prayer leader of Rey said that the first American and British policy was to stop the victories of the Islamic Republic of Iran, both inside and outside the country and for this reason, they engaged in various plots in that direction.

“To understand all these plots requires one to refer to 37 years of history of the Islamic Revolution of Iran,” he stressed.

Expressing that the establishment of Wahhabi-Takfiri groups, such as Daesh, is one of the most important plans of the imperialist powers, he added, “When al-Qaedah and Osamah bin Laden failed to reach their desired result in Pakistan, Afghanistan and the Gulf states, the United States sent large forces of the Takfiris and the Salafis, under the title of Daesh, to attempt to hinder the growth of the Islamic Revolution abroad.”

Hujjat al-Islam Ebrahimi said, “With the arrival of Daesh, the historical movement of ‘Islamic Awakening’ in various countries has stopped. Therefore, it can be said that Daesh has partially succeeded in this regard.”

He said, “By establishing Daesh, the United States and the United Kingdom have targeted Islamic countries like Iraq, Syria and Lebanon as part of a new move to engage human forces, troops, facilities, arms and financial resources to ensure the course of the Islamic Revolution is obstructed in the region.”

The Iranian cleric added, “Unfortunately, Daesh was able to engage a large part of our political, cultural and military forces.”

Hujjat al-Islam Ebrahimi stressed that the plan for the autonomy of the Iraqi Kurdistan Region was followed by the support of some of the countries in the region due to the completion of Daesh’s assigned duties.

He continued, “When the Islamic countries of the region, centred around Iran, united to destroy Daesh, this group was defeated because the enemies of the Islamic system concluded that they should focus on the functions of the Islamic Republic of Iran. For this reason, they are trying to pursue their political and military moves somewhere closer to Iran.”

“Today, in addition to the plundering of Syria’s and Iraq’s oil resources, the infrastructure and facilities of these countries have been severely damaged and there has been a great deal of damage to the people of these countries, and the result of this is the destruction of Islamic countries,” he added.

Hujjat al-Islam Ebrahimi said that after the Iraqi forces launched an initiative to fight Daesh and called on the Iraqi people to recover their land, a new debate is being held under the name of the Kurdish referendum on Iraq in order to divert and concern Syria, Turkey and Iran in conflict with this phenomenon.

Emphasizing that all developments in the region are in the interest of Israel, His Eminence noted, “British-American policies are part of a plan to keep Israel in a margin of safety so that it can implement its sinister goals without interruption.”

The deputy of the Provincial Council of Policy-Making of the Friday Prayer Leaders Across Iran added, “If Israel can establish itself in Iraqi Kurdistan, then we will certainly have to wait for the emergence of another Israeli in the region.”

Hujjat al-Islam Ebrahimi emphasized that there is a heavy responsibility on the scholars of Islam and added, “States and nations must not be deceived by American tricks. Today, one of our greatest difficulties is the lack of unity between Shi’ah and Sunni scholars.”

He said that if the Islamic countries understood the events in the region today, they would not suffer from such problems today, he said, “A large part of the problems facing Islamic countries are due to the corrupt and dependent scholars who issue fatwas because of their material lives, which aren’t based on reason or Islamic law.”