Rasa - Iran’s prominent Sunni cleric Molavi Abdul Hamid has voiced his objection to the potential secession of the northern Kurdistan region from Iraqi mainland, urging the Kurdish people to maintain their unity. 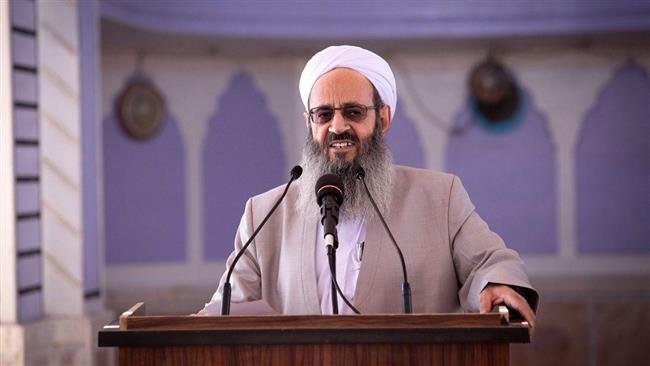 RNA - “The territorial integrity and independence of Muslim countries are vital and important,” Abdul Hamid said in an address to Sunni worshipers during the weekly Friday Prayers in the southeastern Iranian province of Sistan and Baluchestan.

He emphasized that the rights of people of different faiths and ethnicities living in one country must be protected; however, their homeland’s territorial integrity and independence must not be undermined and no geographical change must be made.

The senior cleric also warned of enemies’ plots to break up Muslim countries, including Iraq, Syria and Yemen.

“Enemies are hatching plots to partition Iran and many other countries and seek to turn Muslim countries into small states,” Abdul Hamid said.

In defiance of Iraq’s stiff opposition, the Kurdistan Regional Government (KRG) held a non-binding referendum on September 25 on secession from the central government in Baghdad. Kurdish officials said over 90 percent of the voters said ‘Yes’ to separation from Iraq.

With the exception of Israel, all major regional and international parties have voiced serious concerns over the secessionist move, saying it would compound the problems of the country, which is already busy with counterterrorism operations against Daesh.

Tensions have been running high between the central Iraqi government and the Kurdish leadership over the vote, which has prompted Baghdad and regional states to take a number of punitive measures against the semi-autonomous region.

Tags: Molavi Abdul Hamid Iran Iraq
Short Link rasanews.ir/201oaY
Share
0
Please type in your comments in English.
The comments that contain insults or libel to individuals, ethnicities, or contradictions with the laws of the country and religious teachings will not be disclosed