Rasa – Hujjat al-Islam Qazi-Askar said, “we witnessed the realization of the slogan of ‘Spirituality, National Power and Islamic Solidarity.’” 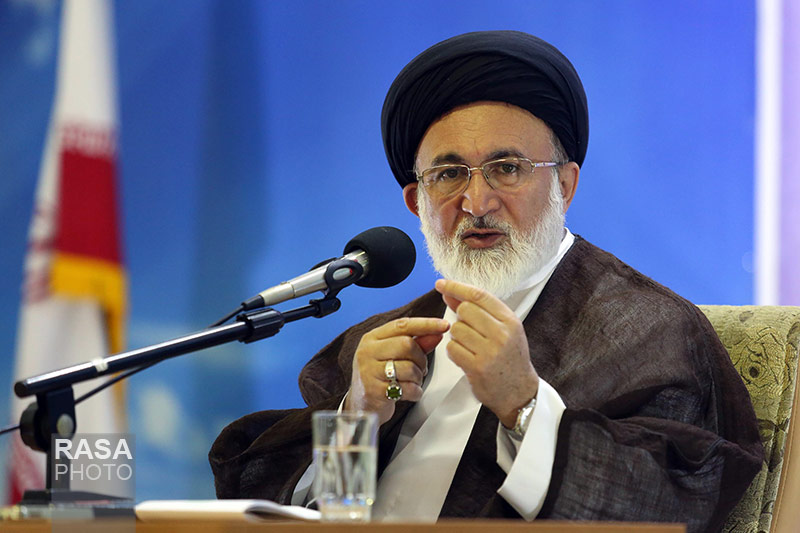 RNA – In a news conference upon return from the Hajj pilgrimage held at Tehran’s Imam Khomeyni International Airport, Hujjat al-Islam Sayyed Ali Qazi-Askar, the representative of the Supreme Leader of the Islamic Revolution [Ayatollah Sayyed Ali Khamenei] in Hajj and Pilgrimage Affairs, stated that the Iranian pilgrims on this year’s Hajj pilgrimage had a respectable Hajj.”

“Thanks to the efforts of the Leader and the Supreme Council for National Security, I’m happy that the motto of the Hajj this year, namely ‘Spirituality, National Power and Islamic Solidarity,’ has been achieved. Fortunately, in the Prophet’s Mosque all that the Leader has referred to as important points was seen,” he said.

His Eminence said that which was related to the Quran and its importance was witnessed completely in the Hajj this year and added, “In the case of national authority, before the Hajj, it was said in talks if the conditions are not met, Iran will not be present. Fortunately, this year, the situation was better than in previous years and the respect for Iranian pilgrims was maintained under all circumstances.”

Hujjat al-Islam Qazi-Askar noted, “Regarding Islamic Solidarity, we also saw the interaction of different classes of people from Islamic countries and many of them acknowledged that Iran’s absence in the Islamic atmosphere of last year’s Hajj was fully evident and that Iran was an important factor in the Hajj.”

He added, “In the year 2015, we had about 64,000 Hajj pilgrims and this year 86,000 people participated in the Hajj and this is a sign of good passion of this year’s Hajj. Only about 30 pilgrims died this year and this demonstrates our greater importance in various arenas. Of course, most of the dead were due to old age. In this period, the relative satisfaction of the pilgrims was established and during the Hajj, we visited the hotels and examined any issues the pilgrims had.”

The representative of the Supreme Leader in Hajj and Pilgrimage Affairs said, “We’re thankful to all the pilgrims who helped us to have a honourable pilgrimage this year. One of the blessings of cyberspace was that through this space, families learned about their the wellbeing of their family members who had gone on Hajj and this was very good. We also thank the media community for the timely publication of the news because they kept the news calm inside the country.”

Referring to the problems encountered in this year’s pilgrimage visit, Hujjat al-Islam Qazi-Askar said, “There were some shortcomings in this trip, which certainly will be discussed but I also said to the Saudi Minister of Hajj and Umrah [Muhammad Saleh Benten] that we should have meetings that will lead to a lasting agreement between the two countries so that there aren’t any other problems for the pilgrimage.”

His Eminence also spoke on the rights of the families of the martyrs of those martyred in Mina in 2015, saying, “The Saudis gave us promises as well as the bodies of eight people who were martyred in the Mina tragedy and one person who hasn’t been identified yet and their families are in Saudi Arabia to identify them through DNA.”