Rasa – Ayatollah Hoseyni-Bushehri said, “We witnessed the passionate participation of the people in this years’ 22 Bahman rallies wherein the people came forth at the peak of the enemies’ threats.” 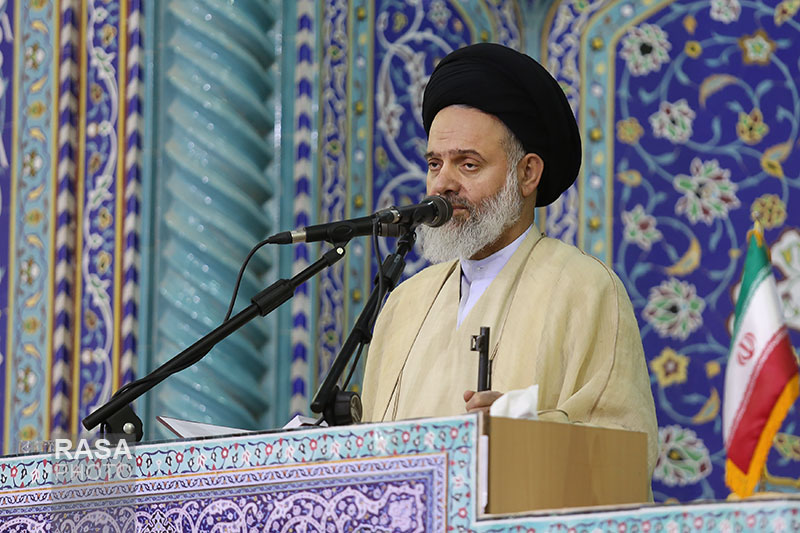 RNA – In his Friday prayer sermon to a large and fervent crowd of believers in Qom’s Qods Prayer Hall, Ayatollah Seyyed Hashem Hoseyni-Bushehri offered his appreciation to the people for their “passionate and epic” participation in in various arenas in support of the Islamic Revolution and added, “The wise presence of the people eliminates and neutralizes all of the enemies’ plots at different stages.”

The representative of the people of Bushehr in the Assembly of Experts added, “We witnessed the passionate participation of the people in this years’ 22 Bahman rallies wherein the people came forth at the peak of the enemies’ threats, especially in regard to the threats of the new American president [Donald Trump].”

Ayatollah Hoseyni-Bushehri added that in some locations, the number of attendees in this years’ rallies were more than double from previous years and the Iranian nation created a great epic.

His Eminence said that this widespread presence contained two great messages – the first is that the people responded to the call of the Supreme Leader of the Islamic Revolution [Ayatollah Khamenei] who said that the people will give an answer to this nonsense and secondly, the presence of the people provided a firm response to the nonsense of the enemies.

He said that the message of the vigilant Iranian people to the enemies is that they must not assume that through their threats, conspiracies and planning, the Iranian people will abandon their revolution.

“The people will stand by the revolution and even if blood pours from the skies and earth, the people will remain present on the scene,” he stressed.

Ayatollah Hoseyni-Bushehri said that that the various ethnic groups in Iran stand firm in support of the Islamic Revolution and all participate in various arenas.

The member of the Society of Seminary Teachers of Qom referred to the anniversary of the infamous 1921 coup d’état in Iran in which the United Kingdom empowered Reza Khan which led to the establishment of the Pahlavi dynasty in 1925.

“Reza Khan attended a mourning ceremony to attract the believers but once he consolidated his power, he sought to undermine and isolate the clergy and to separate them from politics and spoke against Islam. Another one of his infamous plans was to forcefully remove women’s hijabs,” he explained.