Rasa – Ayatollah Makarem-Shirazi said that the Wahhabis are the main factor in the presence of Shi’ahphobia and the most important enemies of the Shi’ah school of thought. 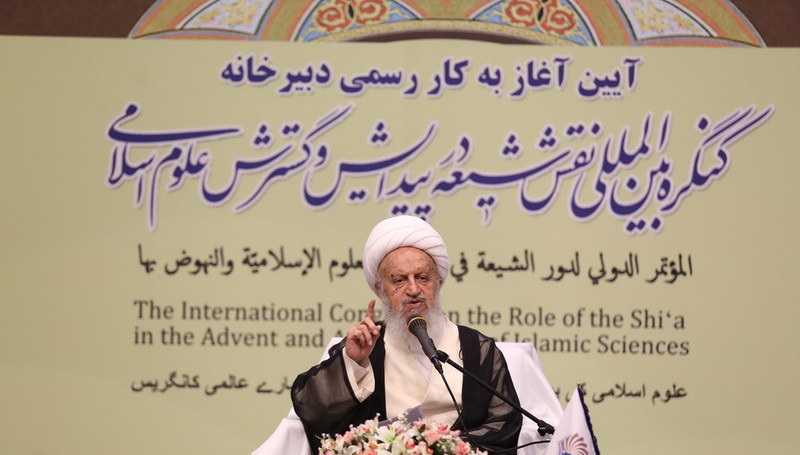 RNA – Speaking this morning at the opening ceremony of the “International Conference on the Role of the Shi'ah in the Advent and Development of Islamic Sciences” at Qom’s Imam al-Kadhim Seminary, Grand Ayatollah Naser Makarem-Shirazi stressed that the holding of this conference is necessary due to the growth and spread of Shi’ahphobia due to the efforts of foreign enemies.

“These enemies have misappropriated the name of Islam for themselves in such a way that they deny the entire role and right of Shi’ahs in the development of Islam in the world,” he said.

The revered source of emulation stated that according to the narrations of the Ahlul-Bayt, true Shi’ahs have signs and the most important if these signs is having a scientific mind and planning which begin with unity.

“For this reason, when we come to this arena, we have done so with inspiration from the words of the Ahlul-Bayt,” he said.

Ayatollah Makarem-Shirazi stressed that the enemies don’t want to recognize any rights for Shi’ahs while the followers of the school of the Ahlul-Bayt played a very important role in the advent and development of Islamic sciences and have a precedence over all others but this truth has been kept secret throughout history due to prejudice, our own lack of attention and our failures.

He noted that scholars have joined hands and made this fact clear that the Imams of the Shi’ah on the one hand and the scholars on the other hand are the pioneers and innovators of Islamic sciences and if it wasn’t for their efforts, today Islam would be facing a different situation.

The commentator on the Holy Quran said that we invite all Shi’ah scholars, truth-seeking Sunnis and open-minded and enlightened Western scholars of Islam so that we can expound upon the valuable services of the Infallible Imams and renowned scholars and also hold a grand congress and dedicate an encyclopedia of at least 30 volumes in order to clarify to the world how distant Shi’ahphobia is from logic and truth.

His Eminence said that the Wahhabis are the main factor in the presence of Shi’ahphobia and the most important enemies of the Shi’ah school of thought and added, “Wahhabis haven’t even provided the least amount services to the Islamic sciences but rather their work consists of the destruction of science and academic centres.”

Ayatollah Makarem-Shirazi added, “It is interesting that these same individuals object to us and say that we haven’t provided any services to Islam while Shi’ahs have provided great services to the Islamic world.”

Tags: Ayatollah Makarem Wahhabi Shiaphobia Shia Conference Ayatollah Makarem-Shirazi
Short Link rasanews.ir/201nC4
Share
0
Please type in your comments in English.
The comments that contain insults or libel to individuals, ethnicities, or contradictions with the laws of the country and religious teachings will not be disclosed