Rasa – Ayatollah Mojtahed-Shabestari referred to Trump’s threats to attack Iran in recent days and added that such threats are “just hollow political bluff and intimidation.” 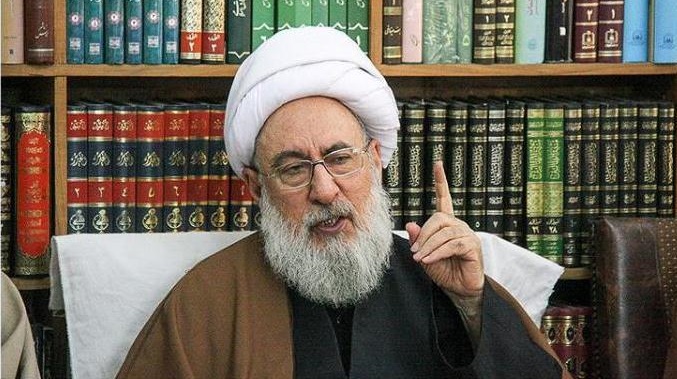 RNA – Speaking at a memorial for martyrs of the town of Mamaqan, Ayatollah Mohsen Mojtahed-Shabestari, the representative of the Supreme Leader in East Azerbaijan province, referred to the importance of the 22 Bahman rallies and said this year’s rallies will also be held with passion.

On the 22nd day of the month of Bahman of the solar calendar year of 1357 (11 February, 1979), the Iranian people put an end to 2,500 years of monarchical rule in the country and the Islamic Revolution was victorious.

The Friday prayer leader of Tabriz stated that this year, the people of Iran will be more enthusiastic in the 22 Bahman rallies compared to previous years and will answer the nonsensical statements made by the new US president Donald Trump and said, “On this day, the people will resist with complete strength, dignity and power against the imperialist powers.”

He referred to Trump’s threats to attack Iran in recent days and added that such threats are “just hollow political bluff and intimidation” because the enemies of the Islamic Revolution know that if they make even the smallest violation against Iran’s borders, they will be met with a harsh and regretful response by the Iranian nation.

Ayatollah Mojtahed-Shabestari described Iran as the most independent and most secure country in the world and added, “The current situation of our country and the powerful presence of the Islamic Revolution on the international stage has put a bad to in the West’s mouth and they are trying in every possible way to harm and impair Iranian society, especially through soft war.”

In another part of his speech, the chairman of the Supreme Council of the Ahlul-Bayt World Assembly stated that today, cyberspace has become a threat and a disaster for our country and said, “If the internet isn’t managed properly, it can become extremely traumatic for the youth.”

He said that one of the causes of decline of knowledge in recent years was the lack of management of the internet and said the students have spent their time on the internet and on often useless and wasteful social networks rather than using their time to engage in research.

Ayatollah Mojtahed-Shabestari said that the participation of the youth in Friday prayers, scientific events and Quranic circles neutralizes the enemies cultural war and added, “The youth shouldn’t stay away from the mosques and Friday prayers and we shouldn’t allow the enemies to deviate our youths through deception and fraud.”

Tags: Bahman Ayatollah Mojtahed-Shabestari Iran Internet Bahman 22 Trump Iranian Revolution Mojtahed-Shabestari Islamic Republic of Iran Islamic Revolution
Short Link rasanews.ir/201n8D
Share
0
Please type in your comments in English.
The comments that contain insults or libel to individuals, ethnicities, or contradictions with the laws of the country and religious teachings will not be disclosed