Kissinger said that Iran’s power is based on the Quran

Rasa – Hujjat al-Islam Salek said that Henry Kissinger stated that Iran’s power is based on a book and a program – the Quran. 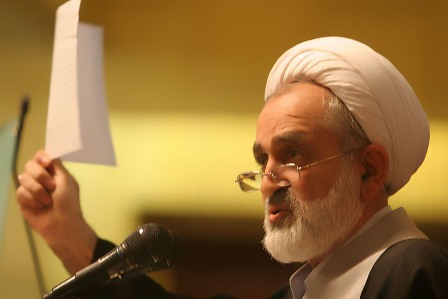 RNA – Speaking with managers and staff of the Centre for Management of the Seminaries of Esfahan, Hujjat al-Islam Ahmad Salek referred to sermon 146 of “Nahj al-Balaghah” and added that the defeat and victory of Islam isn’t due to the large or small number of its adherents, and explained that during early Islamic history, only three Muslims existed.

The representative of Esfahan in the Islamic Consultative Assembly added that before the collapse of the Soviet Union in 1991, Henry Kissinger, the former National Security Advisor of the United States, said by the year 2000, the power of Islam will belong to the axis of the Islamic Republic Iran of and noted that the US has 150 plans to defeat Iran.

He said that Kissinger analyzed more than 16 other countries and reviewed their relations with the Islamic Republic of Iran and noted the growing awakening of Islamic nations supported by the power of Iran and added that Iran’s acquisition of energy resources in the Persian Gulf is the second factor in Iran’s growing power.

“This American-Zionist politician also said that Iran’s power is based on a book and a program – the Quran,” he said.

Hujjat al-Islam Salek said that the statements made by Kissinger to leaders of European countries, China, Japan and other countries under the title of “do not miss an opportunity” was one of the cultural projects which Kissinger made in an attempt to defeat the Islamic Republic of Iran and even said that the US should expand its propagation of corrupt videos to the villages of Iran.

He said that the first principle of Imam Khomeini’s doctrine is based on the inseparability of religion and politics and added that during the time of Mohammad-Reza Shah, the SAVAK told us to not to discuss religion and to go to the mosques and teach the people about the rules of ghusl but that Imam Khomeini’s activities before the 1979 Islamic Revolution were based on introducing Islam without superstition and disclosing the activities of the imperialist powers.

In other remarks, Hujjat al-Islam Salek said that we must pay attention to the words of the Supreme Leader of the Islamic Revolution, Ayatollah Sayyed Ali Khamenei, in regard to “London Shi’ism” and “American Sunnism.”

“Sayyed Mojtaba Shirazi and Yaser al-Habib were given facilities in the United Kingdom in order to sow discord between Sunnis and Shi’ahs. al-Habib has been filmed offering prayers insulting figures revered by Sunni Muslims during their prayers and have slandered the wife of the Prophet Muhammad in a book and also insulted Ayatollah Khamenei, the late Ayatollah Bahjat and other scholars,” he said.

Hujjat al-Islam Salek referred to “American Sunnism” and explained that al-Qaeda and Daesh were created by the Americans in order to introduce Islam and Muslims as violent and to turn the people of the world against Islam.