Iran ‘the guarantor and protector of all Muslims in the world’

Rasa – Lebanon’s Ayatollah Qabalan said that the Islamic Republic of Iran is the guarantor and protector of all Muslims in the world and a fortress for the defense of Muslims. 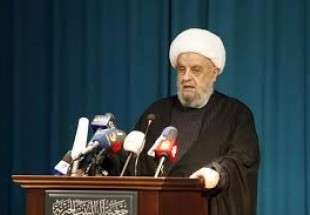 RNA – Ayatollah Abdul-Amir Qabalan, the vice-president of the Supreme Shi’ite Council of Lebanon, met with Gholam-Ali Haddad-Adel, the president of Iran’s Academy of Persian Language and Literature, in Beirut and said, “The Islamic Republic of Iran is the guarantor and protector of all Muslims in the world and a fortress for the defense of Muslims.”

The Lebanese Shi’ah cleric added that Iran is a model of moderation and stability and has taken steps to protect Islamic teachings and heritage.

He expressed satisfaction with Iran’s continuing innovation and said that with its power, this country resisted in the face of the enemies’ conspiracies and sedition and supports the weak and oppressed of the world.

“We ask the Almighty to bless the Iranian nation and its leaders and scholars,” he prayed.

Haddad-Adel noted Ayatollah Qabalan’s lofty status and said that Iran has great respect for the Lebanese scholars because it plays an important role in maintaining and promoting good relations between various Lebanon sects and groups and also between Lebanon and Iran.

In other remarks, in this week’s Friday Prayers sermon at the Supreme Shi’ite Council of Lebanon’s headquarters, Ayatollah Qabalan stressed upon the need to protect the spirit of solidarity and unity among the Lebanese people and said, “The new electoral law can protect this spirit in society and can direct the true representatives of the people in the government and parliament.”

He said that Lebanon is a country of cultural diversity and a model of coexistence between its sectarian components and added that it is our duty to preserve it to remain a beacon in the world and to strengthen our solidarity and our unity.

The vice-president of the Supreme Shi’ite Council of Lebanon expressed concern over the living and economic situation in Lebanon and said Lebanon is in the crosshairs of the Zionist and Takfiri enemies and the Zionist regime occupying Palestine is currently violating of Lebanese sovereignty.

“We call on UNIFIL forces to rein in any aggression against Lebanese territory, water and borders,” he added.

Tags: Haddad-Adel lebanon crisis Qabalan Ayatollah Abdul Amir Qabalan Lebanon Lebanon's Supreme Shia Council
Short Link rasanews.ir/201n6K
Share
0
Please type in your comments in English.
The comments that contain insults or libel to individuals, ethnicities, or contradictions with the laws of the country and religious teachings will not be disclosed