US unable to disarm Iran in “world of wolves”

Rasa – Tehran’s provisional Friday Prayers Leader, Ayatollah Sayyed Ahmad Khatami, blasted the US officials’ remarks against Iran’s missile and defense power, and said the country will continue its progress in this field given the existing threats, specially by Washington. 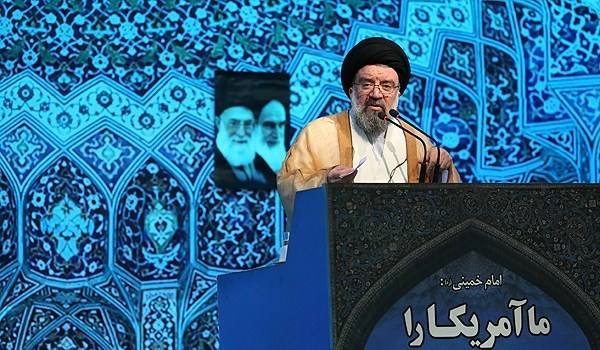 RNA – Addressing a large and fervent congregation of the people on the campus of Tehran University on Friday, Ayatollah Sayyed Ahmad Khatami said, “We stage missile drills and it shows our might.”

“We are living in the world of wolves, wolves like the arrogant US administration,” he added.

Ayatollah Khatami underlined that given the US threats against Iran, the country is compelled to advance its missile and defense programs to defend the nation.

His remarks came after US criticism of Iran’s recent missile tests which was responded by the high-ranking Iranian officials.

Secretary of Iran’s Supreme National Security Council (SNSC) Ali Shamkhani underlined his country’s continued progress and advancement in its defense and missile program, saying that the country is strongly opposed to foreign interference.

“We will not take permission from any country or international organization to develop our conventional defense power and we will confront any foreign interference in the defense affairs, including the Islamic Republic of Iran’s missile power,” Shamkhani said in a meeting with Armenian Defense Minister Vigen Sargsyan in Tehran on Wednesday.

Elsewhere, he blasted the western countries for their attempts to use sanctions to restrict the countries which are victims of terrorism, including Iran and Syria, and the West’s support for terrorist groups.

“The Takfiri armed groups which are supported by certain regional states intellectually and financially beside the Zionist regime are two main threats to global security and unfortunately, the paper coalitions (those which have merely been formed on paper and take no practical measures) have not had any defensible performance in controlling these threats,” Shamkhani said.

Iranian Defense Minister Brigadier General Hossein Dehqan confirmed on Wednesday that his country has tested a missile recently, describing it as part of Iran’s defense programs.

“The recent test was in line with our programs and we don’t allow any foreign party to interfere in our defense affairs,” General Dehqan told reporters in Tehran in reaction to the recent UN Security Council meeting on Iran’s missile test.

He underscored that the missile test “contradicts neither the nuclear deal (between Iran and the world powers signed in 2015) nor the Resolution 2231.”