Rasa – A special meeting was held in the Iranian province of Khorasan Razavi, in which several Sunni and Shi’ah scholars participated. During the meeting clerics discussed origins of Takfirism and the role of Islamic scholars in fighting the Takfiri ideology. 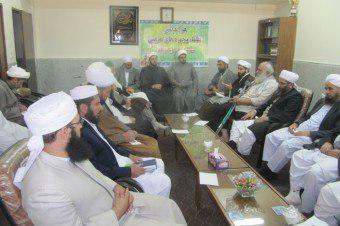 RNA – The first special meeting on issue of proximity of Islamic sects was held in Taybad, in the Iranian province of Khorasan Razavi on Saturday, December 10, in which several religious scholars as well as Friday prayer leaders from both Shi’ah and Sunni sects participated. The topic of the meeting was to discuss the origins of Takfirism and the role of Islamic scholars in fighting Takfiri thoughts.

At the beginning of the meeting, Hujjat al-Islam Alipour, head of the Islamic Propagation Office in Taybad, stated the purpose of holding such meeting as utilizing the intellectual capacities and high social stature of scholars from both Shi’ah and Sunni Islam in order to tackle the present social and cultural challenges in the region.

He further reiterated that holding joint meetings between Shi’ah and Sunni scholars could help develop the proximity and unity among religious sects and boost scientific cooperation between Sunni and Shi’ah figures.

Elsewhere in his remarks, the head of the Islamic Propagation Office in Taybad, spoke on the origins of Takfirism, the Holy Quran’s view regarding the issue of excommunication, Quranic verses on the necessary conditions for excommunication and also the fact that killing innocent people is strictly forbidden according to the Quranic verses, he also highlighted the importance of unity among Muslim ummah.

He further added, “The Takfiri movement today freely engages in killing Muslim brothers by chanting religious slogans. this is considered as a new phenomenon which needs to be fully recognized and it can be resolved on the condition that Shi’ah and Sunni Muslims unite.”

At the end of the meeting, Molavi Ali-Reza Yaqoubi, a Sunni Friday Prayer Leader in the Iranian village of Samangan, near Quchan also said, “The greatest threat in the Islamic world today is the danger of Takfirism, in current situation our scholars must stand against such threats and fight them.”

Tags: Sunni Cleric Iran Sunni-Shia Sunni Scholar Iranian Sunni Shia Sunni Shia and Sunni unity Sunni Shia-Sunni Unity
Short Link rasanews.ir/201mkd
Share
0
Please type in your comments in English.
The comments that contain insults or libel to individuals, ethnicities, or contradictions with the laws of the country and religious teachings will not be disclosed