Rasa – In a meeting with the speaker of the People’s Consultative Assembly of Indonesia, Ayatollah Makarem-Shirazi stressed that we should all be vigilant and join hands to avert the danger facing Muslims. 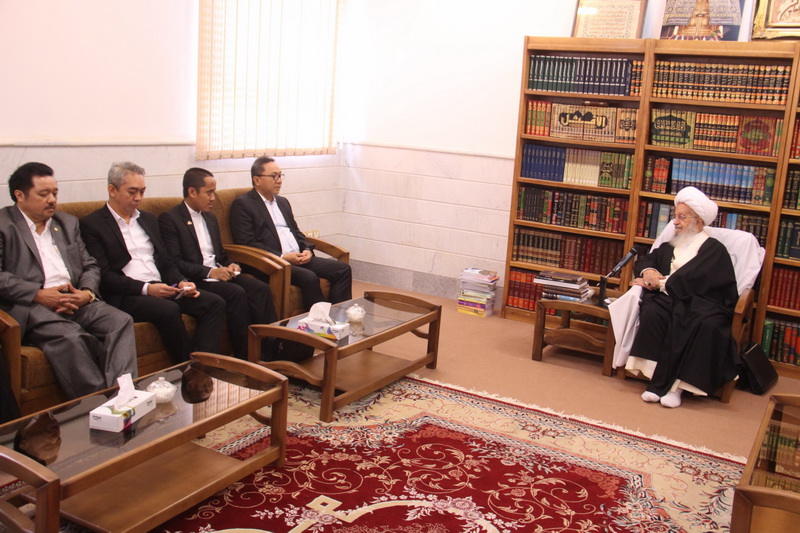 RNA – "Indonesia is the largest Muslim country. Among ourselves, we have always spoken about Indonesia with respect and greatness and believe that the Muslims of this country will follow the path of moderation,” Grand Ayatollah Naser Makarem-Shirazi said during a meeting with Zulkifli Hasan, the speaker of the People’s Consultative Assembly of Indonesia, and a group of members of this Assembly at his office in Qom.

He said that the Takfiri phenomenon in the region consider this issue as a threat to the two countries and that the danger posed by the Takfiris threatens the whole world and added, “We have studied a lot about the birthplace of his danger and have 80 credible documents on hand and understand that the main source of this phenomenon in in the Wahhabism of Saudi Arabia.”

Ayatollah Makarem-Shirazi stressed that we should all be vigilant and join hands to avert the danger facing Muslims.

"In Chechnya," he noted "a large conference on Wahhabism was held in which great Sunni scholars, including the Grand Shaykh of al-Azhar University, was present. At the end of that conference, a statement was issued which stated that Wahhabism is not one of the Islamic schools of thought."

The renowned scholar said that a group of Wahhabis separated themselves from the Takfiris and said, “We have nothing to do with them but our main statement with the Wahhabi-Takfiri is that which I wrote in my book entitled ‘Wahhabism at the Crossroads.’ In this book I separated Takfiris from the non-Takfiri but what is propagated in the world is Wahhabi-Takfirism which our brothers in Indonesia must be careful of their influence.”

His Eminence appreciated the present peace and security in Indonesia and pointed to the Takfiri-Wahhabi efforts to denigrate Shi’ahs through lies and slander that they spread against Shi’ahs and called for the people of the world to be vigilant about the situation of Shi’ahs.

He said Wahhabis consider Shi’ism to be distorted while anywhere you go in Iran, the Quran is the same Quran as all other Qurans and not even one word from the Quran is different from that word in other Qurans. Thus, you can understand the Takfiris’ lies from close up.