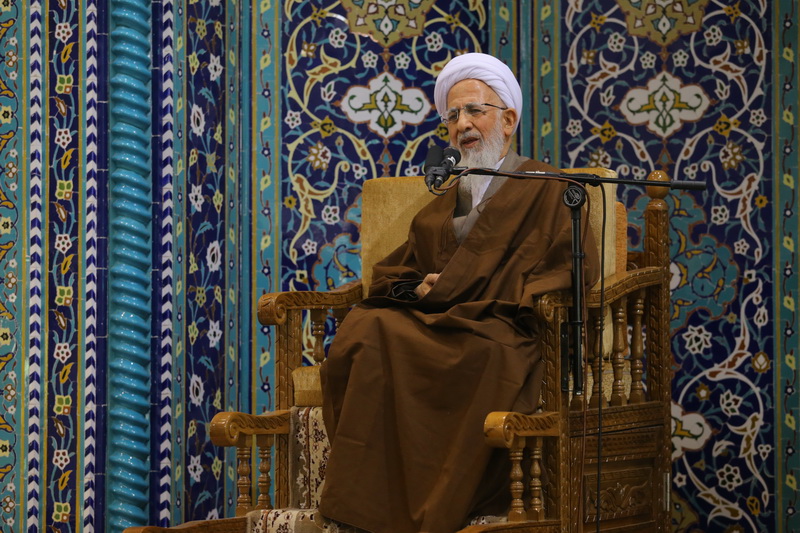 RNA – Speaking during his class on Quranic exegesis in Qom’s Grand Mosque, Grand Ayatollah Abdollah Javadi-Amoli referred to the crimes of the House of Saud, especially their crimes against the oppressed people of Yemen and said, “If one hears the voice of the oppressed and does not help him, he has participated in the injustice of the oppressor.”

The revered source of emulation added that this statement comes from a narration from our Imams who narrated it from Jesus Christ who said, “If someone sees someone who has been injured and does not help him, he is complicit in injuring that person.”

In this regard, he said, “Now, these Western countries see that Yemen is being destroyed and the Yemeni people are being injured every day but they do not act. As a result, they are accomplices in the actions of the oppressors.”

Ayatollah Javadi-Amoli said that in Islamic teachings, it is said that in the case that blood is spilled unnecessarily, many of our prayers will not be answered because we did not perform our duties.

He referred to the Mina Hajj stampede in 2015 where more than 2,400 people were killed due to Saudi negligence, and emphasized that such crimes are continuing every day in Yemen and nothing is being done about it. “You see that in the world today, there is not any news about supporting the oppressed,” he said.

Ayatollah Javadi-Amoli said, “It is said in the Holy Quran that we must strive to take the weapons from the enemies. This is the least amount of work that must be performed. Now look at the Muslim world where the Yemeni people are being bombarded by Saudi warplanes. When should we act on the Quran, God knows!”

His Eminence said the Islamic world is required and must take the weapons out of the hands of tyrants and noted that in the Holy Quran, God Almighty says, “If two groups of the faithful fight one another, make peace between them. But if one party of them aggresses against the other, fight the one which aggresses until it returns to God’s ordinance. Then, if it returns, make peace between them fairly, and do justice. Indeed God loves the just” [49:9].

Ayatollah Javadi-Amoli added that the word “justice” does not been that the war is finished and there is a ceasefire and added, “Yes, a ceasefire is correct but how did all this damage and loss occur? The next step should be compensation for war damages.”