Iran’s security thanks to existence of Wilayat al-Faqih

Rasa – The member of the Society of Seminary Teachers of Qom said: “The reason for the security in Iran is due to the love of God, the existence of Wilayat al-Faqih (Guardianship of the Jurisprudence) and also due to the people’s consideration that obedience of the Supreme Leader is an honour.” 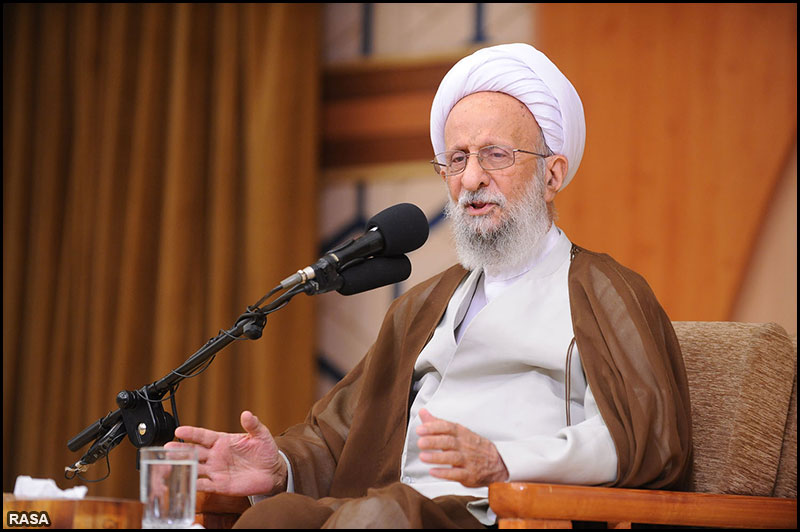 RNA – Speaking during a meeting at Qom’s Imam Khomeini Education and Research Institute with Brigadier-General Hoseyn Ashtari, the Commander of the Law Enforcement Force of Islamic Republic of Iran, Ayatollah Mohammad-Taqi Mesbah-Yazdi referred to the events occurring in the Middle East and said that today in Bahrain, Lebanon Yemen and Syria, not even a small percentage of the national security that Iran enjoys and the security of Iran is not comparable to the security in these countries.

The director of the Imam Khomeini Education and Research Institute added: “The reason for the security in Iran is due to the love of God, the existence of Wilayat al-Faqih (Guardianship of the Jurisprudence) and also due to the people’s consideration that obedience of the Supreme Leader is an honour.”

Ayatollah Mesbah-Yazdi said that since the beginning of the Islamic Revolution, Iran has been involved in conflict, even during the lifetime of the late Imam Khomeini who faced issues such as confronting people who do not accept Wilayat al-Faqih and the issue of internal and external security, including the Iran-Iraq War.

“The first president of the Islamic Republic of Iran, Abolhasan Banisadr, believed in the Parthian fighting style, namely allowing the enemy into the territory and then surrounding and crushing it,” he said.

The renowned scholar explained that Imam Ali said that people who are attacked by the enemies within their own country will be humiliated and if we also fight with the enemy within our country, the stamp of humiliation will be stamped on our forehead.

“During the time of Imam Khomeini, President Banisadr held an opposing view and this view was not unique to him but this was the culture of every person who has accepted Western atheistic culture and even some in clerical garb thought in this manner,” he said.

Tags: Iran Mesbah Yazdi Mesbah Ayatollah Mesbah Ayatollah Mesbah-Yazdi Iranian Revolution Islamic Republic of Iran Mesbah-Yazdi Iran-Iraq War Iranian Government
Short Link rasanews.ir/201mQy
Share
0
Please type in your comments in English.
The comments that contain insults or libel to individuals, ethnicities, or contradictions with the laws of the country and religious teachings will not be disclosed