‘We will not allow Iraqi sovereignty to be violated’

Rasa – Hujjat al-Islam Karbala’i referred to the presence of foreign troops in Iraq and aid: “We should not allow other countries to interfere in our internal affairs. The sovereignty of Iraq is being ignored and Iraqi territory is being occupied.” 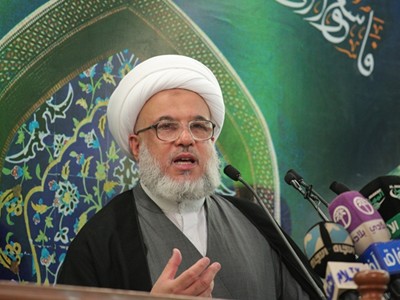 RNA – During his Friday prayer sermon delivered to a large and fervent crowd of believers in the Iraqi holy city of Karbala’s Holy Shrine of Imam al-Husayn, Hujjat al-Islam Abdul-Mahdi al-Karbala’i referred to the beginning of Operation Fatah to liberate the Iraqi city of Mosul from Daesh Takfiri terrorists and said, “These days, the people of Iraq are fighting against Daesh in the form of the army, security forces, police, Peshmerga and Popular Mobilization Forces and are defending their honour, dignity and sanctities.”

The representative of Grand Ayatollah Sayyid Ali al-Sistani congratulated the Iraqi warriors over the victories obtained so far in the operation to liberate Mosul and appreciated the efforts and sacrifices made by the warriors and prayed to God to grant them victory over the enemies and for protection against the present dangers.

Hujjat al-Islam Karbala’i called for all sides to observe respect for the lives of the innocent people and civilians of Mosul and for the people to cooperate with the security forces in order to lay the foundations for the destruction of Daesh and to liberate Mosul as soon as possible.

His Eminence added that the armed forces must comply with humane and Islamic commandments relating to detainees and refrain from reprisals until their crimes can be investigated through legal channels.

The senior Iraqi scholar considered the Iraqi warriors as a source of pride and said the armed forces have accepted their great and dangerous responsibility to fight terrorism and have offered thousands of martyrs and injured soldiers in this path.

“May God bless the martyrs and heal the wounded soon,” he said.

He described the final victory over Daesh as “close” and said soon Iraq’s territory will be "cleansed of the filth of terrorism" and displaced people can return to their homes with dignity.

Hujjat al-Islam Karbala’i called for lessons to be learned from past experiences, bitter incidents and mistakes, saying, “We are living in a time where the blood of many innocent people is being shed, cities are being destroyed, the tears of the orphans are streaming down their faces and the problems facing the people increase every day.”

In conclusion, His Eminence referred to the presence of foreign troops in Iraq and aid: “We should not allow other countries to interfere in our internal affairs. The sovereignty of Iraq is being ignored and Iraqi territory is being occupied.”