Rasa – The custodian of the Holy Shrine of Imam al-Ridha pointed out that we do not consider the phenomenon of Daesh as a religious or sectarian movement which is connected to Sunni Islam but groups like Daesh are created by the Zionists to spread dissension within the Islamic society, shed the blood of Muslims and defeat the Muslims’ armies. 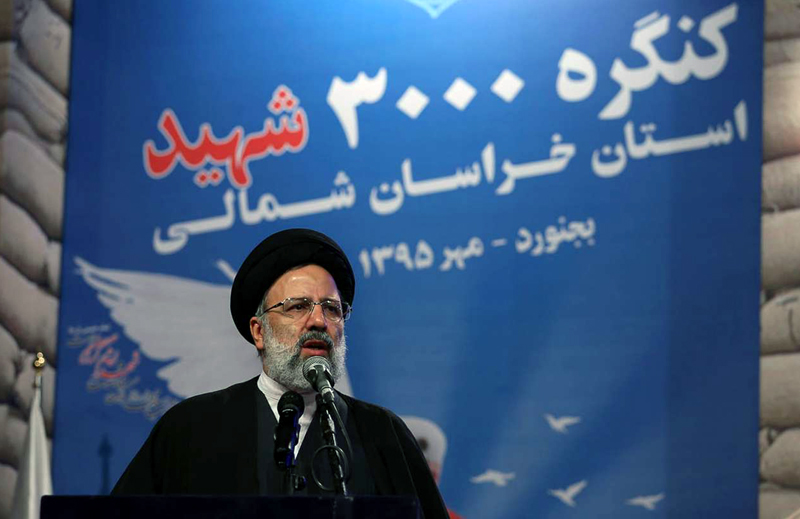 RNA – Speaking in Bojnourd at a ceremony commemorating the martyred seminarians, professors, university students and scholars of North Khorasan province, Hujjat al-Islam Sayyed Ebrahim Raeisi, the custodian of the Holy Shrine of Imam al-Ridha in Mashhad, explained that modern Western society has not advanced because developments in industry and technology are not enough.

“For this reason, we see the greatest immorality and crimes are carried out by Western society,” he said.

He pointed out that we do not consider the phenomenon of Daesh to be a religious or sectarian movement which is connected to Sunni Islam but rather groups like Daesh have been created by the Zionists to spread dissension within the Islamic society, shed the blood of Muslims and defeat the Muslims’ armies.

Hujjat al-Islam Raeisi said: “In fact, the London Shi’a and the American Sunni phenomena were created by the imperialist powers and have nothing to do with Shi’as and Sunnis.”

In another part of his speech, Hujjat al-Islam Raesi stated that the sacred system of the Islamic Republic of Iran originated in the tragedy of Karbala on Ashura and added that Iran’s Islamic system is an extension of this movement and because Ashura is a symbol of social change, the uprisings in human society are due to seeking God and justice in the world.

Hujjat al-Islam Raeisi explained that no matter how the imperialists of world and their puppet leaders suppress the likes of Shaykh Ibrahim Zakzaky and Shaykh Nimr Baqir al-Nimr by extending the Ashura phenomenon to different parts of the world they still cannot eliminate the principles of opposition to ignorance which are due to the blessings of Ashura.

Tags: War on Yemen Hujjat al-Islam Raeisi Imperialism Yemen Ashura Saudi Arabia Ebrahim Raeisi Palestine Anti-imperialism Imperialists Saudi Saudi Aggression
Short Link rasanews.ir/201mOP
Share
0
Please type in your comments in English.
The comments that contain insults or libel to individuals, ethnicities, or contradictions with the laws of the country and religious teachings will not be disclosed