Rasa – Hujjat al-Islam al-Qubanchi condemned the statements of Turkish officials in regard to the presence of their forces on Iraqi territory and said “Through such actions, Turkey has sought to throw stones at the path of liberation of Nineveh Governorate and the city of Mosul.” 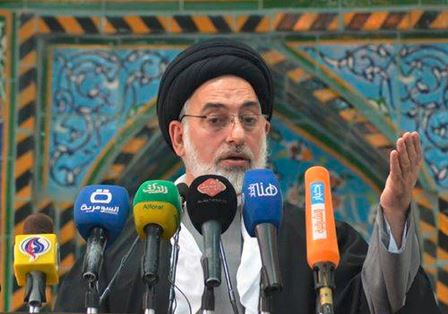 RNA – During his Friday prayer sermon delivered to a large and fervent crowd of believers in the Iraqi city of Najaf, Hujjat al-Islam Sayyid Sadruddin al-Qubanchi condemned the statements of Turkish officials in regard to the presence of their forces on Iraqi territory and said, “Through such actions, Turkey has sought to throw stones at the path of liberation of Nineveh Governorate and the city of Mosul.”

On Tuesday, Turkish President Recep Tayyip Erdoğan snubbed Iraqi Prime Minister Haydar al-Abadi’s criticism of the presence of Turkish troops in Iraq, saying that Turkish forces must take part in the much-anticipated operation to retake the Iraqi city of Mosul, currently held by Daesh terrorists and told al-Abadi to “know his place.”

Hujjat al-Islam al-Qubanchi also denounced Erdoğan’s remarks about the permanence of Turkish forces and their ambitions in Iraq and stressed out that Iraq welcomes friendship with neighbouring countries with the condition that they do not compromise the sovereignty of the country.

He noted Iraq has the strong power of God and the will of the people and those who think that the difficulties created by Daesh will be able to defeat Iraq are confused.

His Eminence said that victory over Daesh Takfiri forces in Nineveh Governorate is near. “The Iraqi army, security forces and Popular Mobilization Forces are ready to begin the operation to liberate Mosul,” he added.

Praising the national unity of Iraq’s Arabs and Kurds, Shi’as and Sunnis, Hujjat al-Islam al-Qubanchi added that the liberation of Mosul is evidence of the unity of the Iraqi people and the failure of the attempts by the ensemble of former Ba’athists and Daesh forces and the defeat of racism and sectarianism.

The senior Iraqi scholar pointed out that the process of liberating Mosul demonstrates that Iraq has the greatest strength by facing the most brutal enemy and also demonstrates Iraq’s political and military capabilities in the darkest of circumstances and the ability of its people and its administration to attempt the liberation.

Hujjat al-Islam al-Qubanchi noted the terrorists’ fear and panic over the operation and said, “The remarks by the Turkish authorities must not distract us from achieving our main objectives in liberating Mosul.”

He added that the current concerns in Iraq will disappear after the liberation of Mosul which will prove that the message of Imam al-Husayn is still alive and the courageous and self-sacrificing warriors will be honoured during the operation.

At the end of his Friday prayer sermon, Hujjat al-Islam al-Qubanchi strongly condemned the Saudi bombing of a funeral hall in Yemen which killed 140 innocent people and injured at least 525 others.