Rasa – Pope Francis, the leader of the Roman Catholic church, thanked Ayatollah Makarem-Shirazi for his letter to the Vatican City. 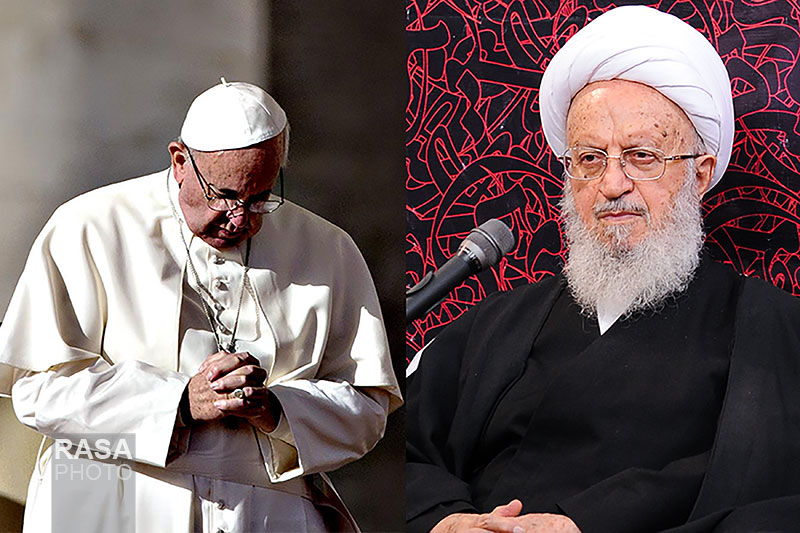 RNA – In response to the recent letter sent by Grand Ayatollah Naser Makarem-Shirazi to Pope Francis in which the senior Shi’a cleric thanked the Pope for his stance on Islam and the fact that Islam does not equal terrorism, the Holy See sent an official letter stating:

Pope Francis was pleased upon receiving Your Eminence’s letter and expressed his gratitude.

As His Eminence, Ayatollah Makarem-Shirazi is already aware, the message of all religions, particularly monotheistic religions, is primarily the absolute worship of God by mankind in addition to expressing love and respect for all the people with whom we interact.

Therefore, administering violence, especially when carried out under the name of God or religion, is considered as a major insult to God Almighty, it is further a form of great injustice against the oppressed.

Therefore, the present religious leaders of the world need to stand united, more than ever before, to voice their support for the entitlement of every human being to their dignity and legitimate rights.

It is noteworthy that during Pope Francis’ visit to Poland, he stressed that Islam has nothing to do with terrorism and violence and no divine religion should be associated with such terms.

Tags: Vatican ‌City Pope Francis Makarem Ayatollah Makarem Pope Vatican Ayatollah Makarem-Shirazi
Short Link rasanews.ir/201mKB
Share
0
Please type in your comments in English.
The comments that contain insults or libel to individuals, ethnicities, or contradictions with the laws of the country and religious teachings will not be disclosed