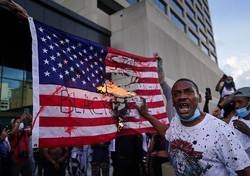 Angry protesters in Portland, Oregon have set on fire a US flag following weeks of violent Black Lives Matters demonstrations in the city.
Protesters burned the flag in the early hours of Saturday morning as police were deployed there. Meanwhile, another fire was set outside the courthouse in central Portland, which has become a focal point for anti-racism protests over the last few months.
The demonstrators have clashed with federal agents in the city for more than 60 days, drawing national attention as authorities blasted marchers with tear gas and the civilians at times responded using their own weapons such as feces, bleach, bricks or batteries.
Hundreds of demonstrators were still on the streets of Portland on Saturday amid public anger over the deployment of federal border patrol officers to the city against the wishes of local officials.
Demonstrators and local officials see the deployment of the agents there as a ploy by President Donald Trump to drum up a "law and order" campaign as he faces an uphill re-election battle.
Mayor Ted Wheeler, a Democrat, has described the intervention as an abuse of federal power, saying it was escalating the violence.
Meanwhile, critics say the Trump administration is seeking to divert attention from its widely criticized response to the coronavirus pandemic.
The arrival of the “Trump Troops,” as they are being called by some, exacerbated the situation, particularly when footage of protesters being snatched off the street by federal agents and put into unmarked cars went viral.
Trump says fed agents to stay in Portland to finish 'cleanup of anarchists, agitators'
US federal agents were expected to begin pulling out of central Portland, Oregon, but are to remain despite having been ordered to leave.
The Republican president tweeted late Friday that "Homeland Security is not leaving Portland until local police complete cleanup of Anarchists and Agitators!"
The tweet came despite Kate Brown, governor of Oregon, saying Wednesday that she had secured an agreement with the White House for most of the federal forces to withdraw from the courthouse, and for it to be guarded by state police instead.
Tags: Trump Police protesters
Short Link rasanews.ir/201tD4
Share
0

Trump to seek another $8.6 billion for border wall in budget

Iranian DM Dismisses US Claims of Defeating ISIL as Lie

US Still in Illusion over Iran

US seeking to resurrect Daesh in Iraq

Trump: Saudi Arabia, not US, will pay to rebuild Syria