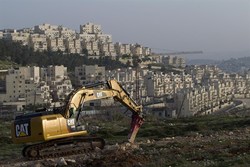 Israeli officials have approved plans for the construction of roughly 1,300 homes in the West Bank, irrespective of the international outcry against the Tel Aviv regime’s land expropriation and settlement expansion policies in the occupied Palestinian territories.

A total of 744 homes obtained final approval for construction, while 545 others had their plans cleared ahead of being considered for a final okay.

Israeli authorities are slated to pass the construction of 418 homes on Wednesday, with 294 gaining final approval for construction and 192 clearing the earlier planning stage.