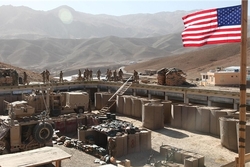 A senior Iraqi legislator leveled strong accusations against the US army on Monday, saying hundreds of ISIL terrorists have deployed at the US bases in the country.

RNA - Kazzem al-Sayyadi, an independent lawmaker of the Iraqi parliament, told the Arabic-language al-Ma'aloumeh news website that over 1,000 ISIL militants are present at the US bases.

"The US forces entered Iraq's territories on a decision of their own and their number now amounts to 30,000. They supported the ISIL logistically during this period and now, over 1,000 ISIL members are present at the US military bases," al-Sayyadi claimed.

There have been frequent reports accusing the US army of cooperation with ISIL in Southeast Syria and Western Iraq, but the accusation leveled against the US military by the Iraqi lawmaker is the first formal statement made ever in this regard.

The Iraqi forces have in the past few years found a huge volume of advanced US-made missiles and weapons in the ISIL hideouts in the country.

"As the ISIL commanders captured in Iraqi popular forces' recent military operations have confessed, the US supports for the terrorist groups are not limited to the dispatch of logistical support," Al-Hosseini told Fars News in 2015.

He reiterated that the US had provided the ISIL with intelligence about the Iraqi forces' positions and targets.

"ISIL commanders trusted the US officials who had assured them that the Iraqi forces would not attack Fallujah because the US had urged the Iraqi government to prevent the popular forces from entering Fallujah and raid Beiji instead; hence the terrorists left Fallujah for Beiji to stay on the alert in there," Al-Hosseini added.