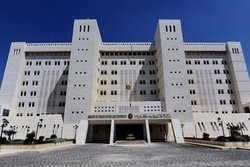 The Syrian government says continued airstrikes by the US-led coalition against ordinary people and civilian targets show the alliance’s reckless disregard for the UN Charter as well as international law.

RNA - The Syrian Ministry of Foreign Affairs and Expatriates, in two separate letters addressed to UN Secretary General Antonio Guterres and the rotating president of the Security Council, Francisco Antonio Cortorreal, on Saturday, said that the crimes being perpetrated by the US-led coalition, the latest of which occurred in al-Kishkiyah and al-Shaafah towns in the troubled eastern province of Dayr al-Zawr, attested to the fact that the alliance had only sought to nurture Daesh and help it expand.

The ministry then called on the UN Security Council to shoulder its responsibilities, and adopt immediate and effective measure to stop US-led airstrikes, mass killings and systematic destruction of Syria’s infrastructure.

It also demanded the establishment of an independent and impartial international mechanism to investigate the crimes, punish the perpetrators and compensate the families of victims.

The letters highlighted that the continued silence of the Security Council against these attacks, neglect of its responsibilities to maintain international peace and security and its inaction to prevent war crimes and crimes against humanity would lead to a very disturbing culture of impunity and would thus undermine the Council, the UN General Assembly and other major world bodies.

The report added that the victims were all members of the same family.

The development came only a few hours after eleven people lost their lives in similar airstrikes against al-Shaafah town.

The air raids severely damaged private property in the targeted area as well.

Syria has on numerous occasions condemned airstrikes by the US-led coalition, asking the UN to force Washington and its allies to put an end to their military intervention in the Arab country.

A senior State Department official said on Friday that the US had no timeline to withdraw troops from Syria but added that it did not plan to stay indefinitely either, two weeks after Washington said it would withdraw its roughly 2,000 troops there.

On December 29, 2018, a source said the planned withdrawal of US troops from Syria would expose the extent of war crimes committed by the US-led coalition.

“The upcoming withdrawal of US military personnel from Syria will most likely shed light on numerous war crimes committed by the international coalition during the so-called fight against [the] Daesh terrorist group,” Russia’s Sputnik news agency quoted the unnamed source as saying.